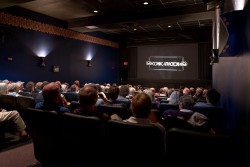 In 1988, the Bookshelf Cinema along with the eBar, were literally built on top of an already functioning bookstore and cafe. We believe that our entertainment complex is the only one like it in the world. Since then the cinema has played two shows nightly and has focussed a spotlight on foreign and art films as well as playing the best of Hollywood movies.

The cinema has been an important gathering place for many and has been an active player in many film festivals and fundraisers. The Guelph Movie Club features one film a month. You can even vote on what you want to see. And of course, most importantly real butter on our popcorn!