RT @cbcfreshair: Up next...need some good reads for the summer? Mary Ito speaks to Shelley Macbeth of @BlueHeronBooks in #Uxbridge a… t.co/zezr8XQwwa


RT @craignorriscbc: Looking for a good book to curl up with this long weekend? At 820 @CBCKW891, we speak with @StephMinett, Co-Owner o… t.co/9J2Uo5Ii0X 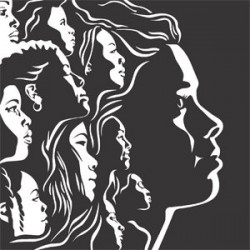 When I was a squirt I had the gall to complain to Mom and Dad, on their respective Days, "When's Kid's Day?" Their response was never a surprise: "Every day is Kid's Day." This past Sunday, while we were all waking up a little disoriented from the time change – my Mom emailed me to remind me of the switch – it was International Women's Day. It's an odd "celebration," mostly because it inversely describes a similar reality to the one I poked at as a kid. Having one day for Women really hangs a lantern on the fact that the remaining days of the year are earmarked for Dudes.

On Sunday everyone was Tweeting and Facebooking thanks to the women in their life, sharing articles about either triumphs or setbacks. Less so on Monday. But, of course, for me, you, and everyone we know, the world isn't so imbalanced. We live in a nation within a nation; we're in the patriarchy, but not of it. We're hunkered down in a sovereign day-to-day where every day is International Women's Day, every month Black History Month, every parade a Pride Parade. Good for us. We're the good ones. Right?

Since 2012, Canadian Women in the Literary Arts (CWILA) has, amongst other efforts, been tracking and graphing the gender gap in the national conversation, both in terms of who's reviewing and who's being reviewed. The disparities shouldn't come as a shock. Even in the supposedly progressive realm of the arts, the national pastime of our super-liberal sovereign spot, the scales are wonky. Sadly, like Canadians who define ourselves mostly by how we're not like the US, we oftentimes watch more of their TV and know more about their politics.

It's been a weird year for women in North America. In my own mind, things started off early, back in September 2013, with David Gilmour explaining to Emily Keeler on the Hazlitt website that he doesn't teach books by women. It was divisive statement, because, hired on account of his personal, not professional merits, he's allowed to teach whatever he wants. But it was likewise confounding, because to deem books by Canadian women unworthy of teaching just seemed myopic and wrongheaded to anyone who's read even just a story by, say, Alice Munro or Mavis Gallant. Then, in the summer of 2014, what might have started out as niche backbiting became – or should have become – everyone's problem, when more and more women within the video game industry started receiving death threats from and having their lives dismantled by anonymous shitheads on the internet. Still in that blast zone, similar callow shitheads stole and distributed the private images of a barrowful of celebrities. Then the logs of Ghomeshi and Cosby got turned over, exposing the creeping ugliness of rot.

All this in what we enjoy thinking of as the liberal, progressive nation state of the arts. The real surprise was that any of this past year's ignominies were a surprise to anyone. Equality in the arts is a canard. And because the truth of the matter is something many would be remiss to admit – as with any other chronic problem – it's all the harder to catch and correct. The reported crimes and misdemeanors of 2014 aren't just isolated incidents, but flareups of a congenital issue. More than a few people have clucked their tongues at an organization like the CWILA, comparing the project to affirmative action. As with affirmative action, though, it's easy for those who benefit from the imbalance to worry that urging people to go out of their way to engage with the work on the opposite side of the scale means dallying with unfit product just for fairness's sake. A reeking load of spurious plop if there ever was one. While inequalities may seem pithy compared to the systemic abuse described above, both findings are just different-sized mountains of the same range.

Ideally, we spend time with art to take ourselves away from ourselves; and if it really does the trick, our selves are revealed back to us in experiences that aren't ours. Yes, art makes for great entertainment, but entertainment can so easily mean familiarity. "When I was given this job," says Gilmore about his sausage party syllabus, "I said I would only teach the people that I truly, truly love. Unfortunately, none of those happen to be Chinese, or women." A declaration like that is equivalent to saying you only deign to talk to people who share your opinion. It's easy to get mad at a dinosaur like Gilmore, as many did, but I think he's someone you should more feel sorry for.

Urging balance – imploring someone or yourself to read books by people who don't look or live like you – is really just urging recalibration, if only briefly. If good art has any practical use, it's recalibration. Harm, more often than not, is thanks to a dearth of empathy. The wonky pies served by the CWILA surely aren't result of malice, but of habit. Imploring someone or challenging yourself to read more books by women, to listen to more music, see more movies, eye more art – or immerse yourself in the ideas and deeds of someone that doesn't resemble you, whoever you are – isn't a matter of working to balance scales or meet quotas. The point is to change the habits that require scales.