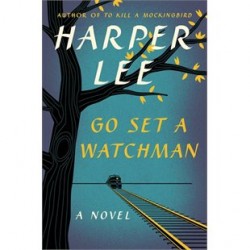 Go Set a Watchman: A Novel

It's no hyperbole to suggest that Harper Lee's To Kill a Mockingbird, published in 1960, is probably the most broadly beloved North American novel. Lee's evocation of childhood summers is so casually rich, I wouldn't be surprised if many readers have adopted false memories of growing up in the South in the dusty 1930s. Add to that summertime nostalgia a racially charged court case showing the lawyer Atticus Finch's children that a person should be judged on their character above all else, and you have a book with a moral longevity that has kept the story relevant for every new generation of readers. Its legacy, and the legacy of its author, was further enlivened by Mockingbird being a stand-alone. Nelle Harper Lee came out of nowhere, delivered a book that spoke so eloquently for itself, and then returned to wherever she'd come from. What does it mean, then, after 55 years of Mockingbird flying solo, to now have a sort of sequel?

Go Set a Watchman comes to us with a little controversy. Lee has been very protective of herself and her (heretofore) only book ever since its publication. The impression was she'd said everything she wanted to say in that single submission. Her "Introduction" to the 33rd anniversary edition was simply a terse complaint about introductions, which, she writes, "inhibit pleasure... kill the joy of anticipation... [and] frustrate curiosity." The recent and sudden "discovery" of a new book raised some questions about Lee's level of consent at her advanced age. More may come out about that conflict, but for the time being I don't think it's enough to keep anyone from having a look at Watchman.

If I have any realistic qualms with the new book as it is, they concern a lack of context. A second party Introduction here would have been helpful, as the circumstances of how the book comes to us are important. It's good and somewhat important to know, going into Go Set a Watchman, that the text is essentially the book that Lee first submitted for publication. Here Jean Louise "Scout" Finch is 26, living in New York, and home to visit Maycomb for two weeks. The sleepy, poor town of her childhood is changing, both willingly and not-so-willingly. During her visit, as some of the shine of her childhood is scuffed away, Jean Louise flashes back to her youth, to the summer games with her older brother Jem and her seasonal neighbour Dill, as well as the creeping secrets and ignominies of a small town. Lee was encouraged to expand on these elements and the result is To Kill a Mockingbird.

Delving into Watchman, it's key to know that, even though its events take place twenty years after the classic book, it was written before. It's likewise important to know that, by all appearances, this novel comes to us as it was originally submitted. As a result, the chronology of the writing mixing with the chronology of its story make for a sometimes awkward – though not necessarily disastrous – fit for the two books. For a writer so protective of her work, leaving out a note about the manuscript's provenance feels like a severe disservice.

As far as the actual text goes, though, all that's neither here nor there.

Any picadillos with the story itself will probably come on a reader-to-reader basis, depending on any given reader's relationship with the original book. Essentially, Jean Louise Finch has been 9 years old for 55 years now, preserved in all her stubborn, scrappy perfection in the amber of literature. Atticus Finch has stayed a crack shot and champion for those who can't fight for themselves and Calpurnia has remained a loving, knowing, and frank mother figure. Each reader will have to decide for themselves whether they want Scout to grow up to be a 26 year old woman chaffing under the expectations of being a woman, and a Southern one at that, or whether they want to encounter Atticus, who they lionize as much as his own children, in his old age, arthritic, flawed, and politically out of step with the time.

Choosing whether or not a beloved character can age and change is a privilege not extended by life. With this in mind, Watchman starts to feel like a meta-narrative. The concerns of the book are the reader's concerns as well. Jean Louise's adult return to Maycomb doubles as our adult return to Maycomb. The town that she and we find is crawling out of the Depression-era poverty, the tectonic plates of class beginning to shift. But it's also holding firmly onto its history and autonomy, especially as far as race relations are concerned. Watchman asks to what extent should we resist change, wonders how sustainable the status quo is. The reader asks this of the book as Jean Louise asks it of her hometown, of her father, of herself.

Part of Mockingbird's long-distance appeal has to do with the moral neatness of it, I think. It's about maturation, a song of innocence of experience, but in a limited way. The lessons learned are fundamental, but still self-evident. The galvanizing court case at its centre deals with a prejudice so blatant that the world is easily divvied up into heroes and villains. Watchman is the next logical step of that maturation, which is complication. If Mockingbird is a fine evocation of the pivots of childhood, Watchman is likewise a fine evocation of the pivots of adulthood. Supposedly the indefatigable success of Mockingbird squashed Lee's ability to produce a sequel, but it turns out that, with what was her first book, she had written a fitting companion to her second.