Our over the top bestseller this week! So great that people are getting out and walking trails, enjoying nature and each other's company. Many thanks Nicola!

Hikers and nature lovers - a whole new world has just opened up for you. Check out Nicola Ross's newest loops and lattes!

Finally it's here!! Just in time for the fall hiking season! Check out caledonbrucetrail.ca for their drive-in film fundraising event September 17.

Lands of Lost Borders: Out of Bounds on the Silk Road

Beyond the Trees: A Journey Alone Across Canada's Arctic

The perfect book to read in the high heat of this summer! One of our bestselling books last year, now out in paperback!

Once you open this you won't be able to put it down. 4600 digitally remastered paintings with coloured range maps on each page.

From leading ornithologist David Sibley, this flashcard deck is designed for the beginner and backyard bird watcher. Soon your backyard will be full of birds - and a great way to sharpen your mind!


RT @_BackPeddling_: We’re OPEN!! Please scroll through this post to find out our hours and Covid19 guidelines moving forward. We look f… t.co/oCTFb2WXws

Nothing Fancy: Unfussy Food for Having People Over

Fraiche Food, Full Hearts: A Collection of Recipes for Every Day and Casual Celebrations

The Food of Sichuan

Named one of the most anticipated cookbooks of Fall 2019 by Bon Appétit, Eater, Epicurious. An essential update of Fuchsia Dunlop's landmark book on Sichuan cuisine, with 200 recipes and stunning photographs.

The Art of Living According to Joe Beef: A Cookbook of Sorts

The Instant Pot Bible: More than 350 Recipes and Strategies: The Only Book You Need for Every Model of Instant Pot 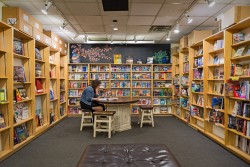 Welcome back to our show! We've settled it, we are the The Village Podcast. You can subscribe on iTunes here.

In today's episode Steph and Candice take on the topic of awards and what purpose they serve to the industry.  You can find a complete list of the 2015 Governor General's Awards, and the Scotiabank Giller Prize's 2015 long list and short list online to choose some books to pick up for the holidays. The winner of the 2015 Man Booker Prize, Marlon James with A Brief History of Seven Killings , is strongly recommended by the lovely book sellers in the store. You might remember earlier this year when the Hugo Awards were handed out. There was some controversy over it and give some thought to whether they were right to handle it how they did.

See our cinema calendar for the full list of films playing this month, including films mentioned He Named Me Malala, The Reflektor Tapes, Blue Velvet and Terminator 2: Judgement Day.

Some other upcoming events with The Bookshelf include: Margaret Atwood reading and signing on November25th at War Memorial Hall. Tickets are $8. If you're a member or a student, tickets are $6. Save $3 on either ticket with the purchase of Atwood's new book, The Heart Goes Last.

Emily Richards book launch of her cookbook Per La Famiglia on November 17th in the eBar.

Are you taking part in NaNoWriMo? Join other writers in The Writing Room every Monday from 9am to 12pm in the eBar.

Books discussed in this episode: A Brief History of Seven Killings by Marlon James,  A Fine Balance by Rohinton Mistry , The War of Art by Steven Pressfield , The 52 Lists by Moorea Seal , The Heart Goes Last by Margaret Atwood , Per La Famiglia by Emily Richards

Follow the Bookshelf on Twitter and Facebook. Stay up to date on what's happening around the store at http://bookshelf.ca. Send us feedback at podcast@bookshelf.ca Theme music from the Free Music Archive, by The Underscore Orkestra

Have a listen to our podcast:

The Village Podcast
Go To Podcasts