@BookRiot Hmmm.... We do! We have a bookstore, cinema, kitchen, bar and performance venue. We have also been known… t.co/sa65J8ykfd


@LiteraryHoarder Ha! Little did they know.... thanks for sharing!


RT @MarionReidel: I'm reading "Consider This" by @chuckpalahniuk . Great insight into good writing. Got it @Bookshelfnews. Here's a… t.co/aEjMbwfmet

Report From The Interior 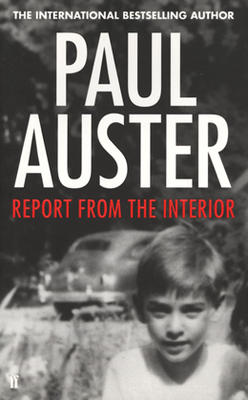 Report from the Interior

If you are interested in the psyche, child rearing, creativity, parenting, pondering the whole tangled ball of existence, don’t go to our self-help shelves. Go around the bend to the biography section and check out Paul Auster’s Report from the Interior, which is the fourth in his ruminations about memory, relationship, authenticity, and meaning.

I began my sojourn with Auster in the 80’s when I read Invention of Solitude which he wrote after his father died. This was the most honest evocation of a deeply fraught relation that I had ever read and it surely was a game changer for disclosure in familial drama. Since then I have followed him closely. Perhaps it is because we were born in the same era. It also could be that his hunger for meaning through ideas, literature, film, sport and most importantly love, is accompanied by an immense talent to construct a compelling narrative.

This volume is like a blueprint for his formative years. But it is a blueprint with a door that opens down into many levels. Perhaps Freud might call it id land, which is why Auster writes his whole story line detached from his own struggles and miseries. Throughout the book he refers to himself as you, as if talking to the memory of his own young self. His understanding of narrative arc is most astounding when he recounts two movies which changed his whole gestalt when he was not yet a teenager. I doubt that the actual movie The Incredible Shrinking Man would grab me the way his recounting of it did. I raced through it and still do not understand how he captured the adrenaline of it all. He did the same for I Was a Fugitive of a Chain Gang. In essence his exposition is one of the best condensations of capitalism and all of its evils that you will read.

One of the insights gleaned from reading this book was how hands off and even down right bad parenting did allow kids to wallow in their own boredom and if lucky find their true delights in life. Ironically this was, reinforced by no other than Bobby Orr. I had just finished the book and turned on the TV to see Orr being interviewed by Peter Mansbridge. And there was Orr making fun of the super organized professionalism of kids and sports. He thinks it’s crazy. He spent his time on outdoor rinks playing shinny. Auster was a baseball fanatic and spent as many hours as he could finding his bliss with neighbourhood kids on the diamond. Oh, for the good old days!