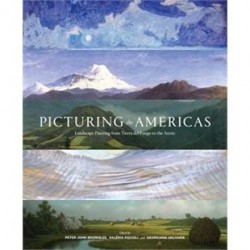 Picturing the Americas: Landscape Painting from Tierra del Fuego to the Arctic

This August we had a wild and wonderful 5 day kayaking trip along the coast of Georgian Bay’s Franklin Island and then onward to the more remote McCoy’s. Two grandparents, two parents, two boys 9 and 11. Paddling over 6 hours a day allowed my mind to wander and I often found myself thinking that I was seeing the same sky, water and rock that paddlers had seen 300 years ago. This made me, a floating fleck in the universe feel a bit more immersed in the steady stream of history.

The day after I returned home I read an article featuring Joseph Boyden talking about the wonders of a book called Picturing the Americas: Landscape Painting from Tierra de Fuego to the Arctic. He was the guest lecturer of this show’s opening exhibit at the AGO. He described it as a “bold and massive undertaking to cover two continents of art. Its breadth is phenomenal.” The exhibit encompasses the early nineteenth century to the early 20th - before the takeover of the wilderness by cottagers, companies and other owners of the landscape. I knew that I had to have a copy.

A major aim of the exhibit was to show how the Americas are so connected. One of the earliest champions on South American art was the Prussian explorer and naturalist Alexander Van Humboldt. He was struck by how landscape artists in both North and South America were interested in protecting nature and able to push US congress to create the National Park system. This was a huge influence in the creation of Parks Canada. In the era way before Instagram paintings were brought in to Congress to impress law makers about the importance of preserving the earth’s beauty. The paintings chosen are both stunning and interesting. They capture both the quality of light and the rituals and routines of daily life.

The sections are not themed geographically but philosophically and each artist has an excellent introduction by someone immersed in the art. Of course Cornelius Krieghoff, Georgia O’Keefe, Emily Carr and David Milne are represented but so are many other artists that I have never heard of. I was particularly taken by the Uruguayan artists, Pedro Figari, Jose Cuneo Perinetti and Pedro Blanes Viale. Their work is definitely as compelling as any Monet or Van Gogh’s that I have seen in books or galleries.

This gathering of artists has inspired me to desire three things. Go to the AGO exhibit which runs until September 20, start planning our next kayaking trip, which next year will include another parent and grandchild, and who knows, maybe even think about taking a trip to Uruguay!