Will the Real Vladimir Putin Please Stand Up 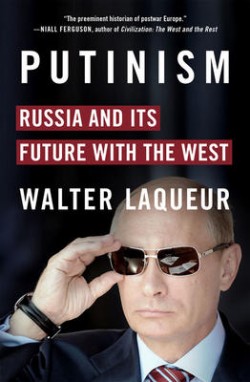 Putinism: Russia and Its Future with the West

It isn’t any secret that Stephen Harper loves to spew invective against Vladimir Putin. But after reading Putinism by Walter Laqueur, I am struck by how much these two have in common. The first, and probably most important, is that they have both maintained their political success by reigning during an era of high priced oil. This, of course, is changing and so may their popularity. They also both love monuments and memorials. This can be read as a metaphor for big power chauvinism. They are exceedingly private and do not have many close advisors. And there’s also something very similar about the eyes. Enough said.

Laqueur’s fascination with Russia is obvious. He has written over 20 books and does an excellent job of explaining the Russian psyche through its chaotic history. In fact, this constant chaos is a clue to why the average Russian does not mind strong rulers. Angered by the lack of respect after WW2, the glory of the motherland was a hole that needed to be filled. In a 2013 poll when asked what was more important: to be seen as a respected super power or to have a high standard of living, 56% preferred the super power agenda. The Sochi Olympics and the Crimean situation certainly fed this need and help explain Putin’s 90% approval rating.

To be clear, I am not a fan of Vladimir Putin. I mean the guy is purported to have $160 million dollars in wrist watches. But Putinism has helped me understand why an agent from the KGB is now running Russia. Laqueur also does an interesting job of forecasting Russia’s future. They have a big problem with demographics. A Russian demographer says that the population will halve in the next 50 years as the birth rate has fallen from 1.9 in the 60’s to a recent 1.6. Its future has been described as a space without people. One solution is immigration, but xenophobia runs pretty deep. And then there are so many other fractious and volatile relationships - China, the EU, the United States, all of the Central Asian republics. Laqueur illuminates all of this with little fanfare. There is much to be recommended in this book. I think I’m even going to order one of his older ones.