When You Don't Look a Day Over Sixty 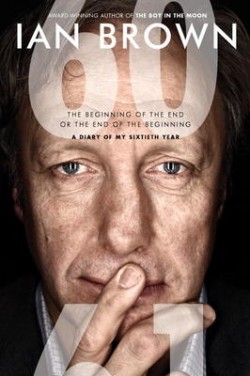 Sixty: The Beginning of the End, or the End of the Beginning?
The Boy in the Moon: A Father's Search for His Disabled Son

I had the pleasure of Ian Brown’s company on Thanksgiving weekend. I cracked open Sixty: The Diary of My Sixty-First Year thinking that I would only spend a few minutes with it because after all, I already know a few sixty year old men and as they say, enough is enough. But as with his last book, The Boy in the Moon, which is about his life with his very debilitated son Walker and which I was also hesitant to read, I was immediately taken prisoner. I took a break for Thanksgiving rituals but other than that my head was in the book.

Brown wears all of his neuroses in bright pinks and lime greens. This is initially refreshing, as many men keep theirs silently in their pockets, locked in their cell phones or played out on the squash court. He is constantly vibrating about sex and whether he is a noticed commodity anymore. And we thought that it was only women who obsessed about their body image. Of course this does get tedious, as does his other fixation, money. Is there enough to retire, redo the kitchen, keep up with his friends? He is in the media and book business which as you know, are like him, in decline.

These are the mildy irritating and yet funny parts of his year long diary. The exhilarating parts shine brightly because he is and always has been a reader. He can't scramble over rocks in cottage country anymore but his mind brushes with greatness througout. He integrates Pliny, Shakespeare, Hocking, Larkin, Vanier, Boswell, Olds, Atwood, Winnicot, Woolf and many more as if they are friends on facebook. What they are saying resounds with him and it will with you also. I had to get out my notebook to write these well considered thoughts down. How about this one by Jean Vanier? "Purgatory is the stretch before death when you regret all of the chances you missed to be human."

At the same time Brown like all of us is stuck in the body. He has a litany of irritations which he hilariously recounts throughout. Glaucoma, plantar fasciitis, deafness, allergies, bronchitis, hemorrhoids, which he describes as " a rich,, lustrous, steamy affair, full of itching and compulsive scratching, a Satyricon of the perineal world. Christ knows what's going on down there, but it feels like the intersection of highway 410 and the Trans-Canada highway." These are all signposts to aging but they are lit up with humour and gutsy candour!

I'm not sure if you have seen the movie My Dinner With Andre. It is one of the most interesting that I have seen, just a conversation about life between two men in a restaurant. It was so simple and natural that I naively thought that it must have been easy to make. Then I read an article that said how many takes were involved in the movie. Many, many, many to create an elegant simple movie. This is what I feel about the way Brown writes. Everything flows but behind it all is hours of research and a lifetime of love with the written word. Thank you Ian Brown. My weekend with you was a pleasure.