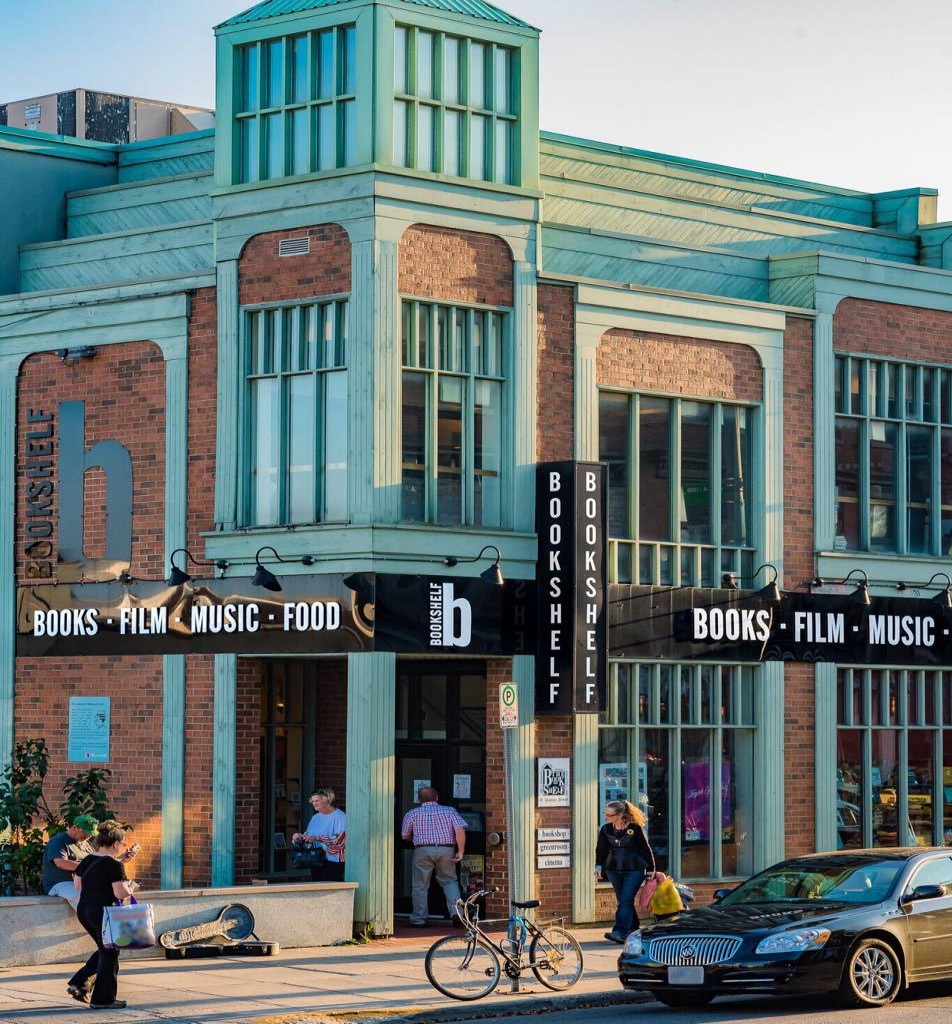 A lot of independent bookstores across Canada carry a similar mission: to provide their communities with a curated selection of Can lit, international gems, local…
Bookshelf twitter
Follow @bookshelfnews
"Through her own experiences, Urquhart seeks out the elemental in the circumstantial, the universal in the personal… t.co/1FIto2jeE8 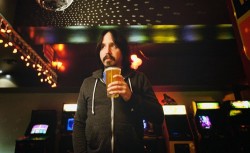 Why Guelph is the Village I call Home
Jim Guthrie: Who Needs What

If Jim Guthrie wrote and recorded a thousand songs, I’d probably give a reasonable go at passing them all through my earholes. This is a lo-fi-ish way of saying that I’m an enduring fan of the breadth of periods, fidelities, moods, genres, and projects he’s spanned as an independent Canadian musician and I don’t need much external convincing about the importance and quality of his work. But inevitably, from song to diverging song, I have wondered on the idea of the person behind this impressively wide and restless array of music. Not big on giving into the amorphous and self-serving bloat of such imaginings, I was relieved to fix my eyeholes on Andrew Hood’s Who Needs What (the 5th entry in Invisible’s Bibliophonic series), a just-released biography about Guthrie and his community of musical careers. Deft at covering a lot of history and a tangle of personal trajectories in a dash of time (106 pages), Hood contributes a wryly reflective and seriously well-researched document to the under-stocked library of Canadian music writing. Importantly, his inclusion of a multitude of voices centers the book against the mad forays into intentional fallacizing that mar much biographical work. Personal interviews with Guthrie, his friends, collaborators, fans, and critics create a happily roving narrative space within which many dimensions of character sound. Still, I wondered what Guthrie would think of the various personae that oscillated between song and page. Curious to get a better sense of biography as a splitting whole, I asked him.

Brad de Roo – who is pleased to let you know you can be a centering voice in the matter by attending the launch at the eBar on April 29th @ 7:30 and asking Andrew who needed what.

Did you learn anything about yourself through being biographied? Did people remember things differently from you?

I struggled with the idea of a bio at first. Mostly with fear of what it might reflect but also with the insecurity of “will anyone give a shit?” Everyone creates their own version of any past event but there wasn’t anything that popped out. The most overwhelming aspect of all of this was how much good nature was thrown my way. It was a huge reminder of how important people, music and community is to me. I was also very impressed with how well Andrew connected all the dots. I’ve known and worked with so many people over the years and I’m very thankful for this document.

You've re-released A Thousand Songs on vinyl with a digital bonus of re-recorded originals alongside the release of Who Needs What. Did the biography, and all it conjured, influence the process of selection and expansion?

This certainly wasn’t the intention but at some point during all of this I realized the book is basically an ad for the album. I’ve been meaning to release A Thousand Songs on vinyl for a long time. The book would give this album greater context and it was sort of “now or never” moment. When recording the cover versions of my older stuff for the digital side of the reissue I was sort of blown away by how well these 15-year-old lo-fi experiments translated to the band in the studio. We didn’t rehearse for the sessions and the idea was to try and be a little spontaneous with arrangements and feel etc. Most of them are straight covers but some of them got a dramatic overhaul and I’m thrilled with how it all turned out.

Andrew quotes a passage from composer/writer R. Murray Schafer at the onset of his book that you’ve referenced in some of your work. Schafer at one point writes: ‘We have split the sound from the maker of the sound.’ Do you feel split from your sound(s) in changing ways?

I’ve always loved this quote/idea. I still find it strange that I can listen to a performance trapped in time years after it took place. Capturing vibrations as they travel through the air seems like something only insects (or aliens) should have the power to do. It’s really insane when you think about it and to this day I still don’t really understand it. I definitely feel split from my recordings. I record so much that I have no memory of recording certain things. It’d be like trying to remember every piece of clothing you’ve ever worn. You can remember a bunch but there are so many favourite pants you’d totally forget about if it wasn't for that class picture or some other visual document of you wearing them, ya know? My recording habits have been much like putting on a pair of pants. It’s just something I do everyday.

Many musicians I know or have read about often have an ambivalent relationship to music writing. Steeping in the music history of the artists they admire is fun, inspiring, and contextualizing. Reading assessments or explorations of their own work is awkward, painful, and frustrating. Do you read much about music? Do you have favourite texts, whether theoretical or autobiographical or some panning swirl of the two? Have you ever had a hard time with journalistic or critical accounts of your work? Or is this one of the unavoidable dimensions of splitting sound from maker?

The Tuning of the World was a big one for me. Man, so many others. I’d have to be in front of my bookcase to jog the memory. It’s been a while since I’ve really read anything (not counting instruction manuals, recording tips and tricks or reviews of gear). So much music journalism (and music in general) is such a pissing contest. There was a year or two in my career where I tried to piss further than the critics but it’s such a waste of time and energy. It’s tough to make a living with your music if you’re unwilling to piss (or at least drink the Kool-aid) but it’s possible. I’ve always thought it’d be more interesting if we could thoughtfully write about the experience of hearing a song outside of all the “is it hip or cool enough” trappings so many recordings fall fate to. Like, writing about how a piece of music you love effected you as it passed through your earholes instead writing a grumpy, misinformed paragraph about a record “you had to review for your job”. I always felt sort of bad for bands that get bad reviews. It can be heartbreaking. It’s like feeling bad for a goalie that gets scored on a lot or something. You just want to give them a hug.

In the book, the whole Guelph Home Rock scene seemed like a good balance between interviewing aesthetic responses together and holding up pals for the odd fragile, fleeting pissing contest. What do you think of current avenues for Home Rock, DIY musical expression? I've dribbled a bit in the waters of SoundCloud, Bandcamp etc and found some very awesome stuff to respond to, but have often felt like it was an infinite library devoid of a community. How's the current internet set up changed the face of getting recordings out there?

The internet is a tremendous resource. It’s the best and it’s the worst. A person’s ability to create and connect has never been more easy but it’s only one side of a cassette, if you will. In my experience you have to try and counter it with a real-life community because the internet can be a dark and lonely place. And you’ll meet the worst critics in the comments section so you have to have a lot more going on in your creative life in order to have a healthy outlook. I’m super glad I lived for a good hunk without the internet because it makes me appreciate both worlds more.

Do you ever think of your music as autobiographical? Is there a difference of/in personal inclusion when you write albums that are not for film, ads, or video games? Does the score or ad music (or music to fit with visuals in general), ever feel like the aural equivalent of writing a character's, world's, product's, object's, or scene's biography?

My music is a lot of things to me. It’s mostly a form of therapy and escapism though. And yeah I totally get into character when coming up with a piece of music. One of things I learned early on is I have to treat all jobs / songs with as much care as I would anything else. I used to try and hold back when doing ads. Like, be less of a musician or something, ya know? But that’s when you feel the dirtiest. That’s sort of the definition of selling out to me, when you phone it in and create with the intent of doing a worse job than you normally would. You sell yourself short and that’s a bigger crime. I’m not saying I have to be in throws of ecstasy when writing a diaper jingle but I’m I’m still gonna "bring it" and try and write the best damn diaper jingle anyone has ever heard. You should always try to do your best work or just do something else. Anything less is a bummer.

In the book you talk about getting involved in art as being a form of therapy too. What therapy does music provide for you?

I guess it’s therapy in the sense that it puts me in a focused state and keeps me from doing / thinking whatever counterproductive things I might get into otherwise. It also ties into what I was saying earlier about always bringing your A game. A lot of healthy things go on in your head when you set out to do good and succeed. It makes me a better person. Too many head games otherwise. I’m sure there’s a motivational poster out there that with a cat or a sunset on it that says “When you do good you feel good” but it’s true.

Does a biography threaten this productive flow of time with a sense of finality?

Lastly, is there anything you've always wanted to be asked about that no one has asked? Revealing the question or not, could you answer it?

You’ve just asked the question I’ve always wanted to be asked... So I’m not sure how to proceed.