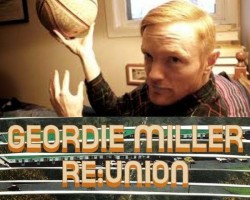 Proving that the national importance of poetry in Canada cannot be hemmed into a single month, we continue to celebrate the form by welcoming Haligonian (originally of St. Catherines) to the bookstore to trumpet his hot new book, Re:union. Geordie took the time off from a hangover incurred at a local wedding to field a few pressing questions--each more pressing than the last.

Andrew Hood: Your poem "Disciples" begins "Dear Andrew..." Writing this poem, did it occur to you that I would think you were addressing me and find this confusing, maybe even troubling?

Geordie Miller: It hadn't actually occurred to me that anyone other than the addressee of my poem could be named Andrew. I'm a poet and therefore at least two parts narcissist. I could go on to say something about the difference between personal expression and effective communication, but for now I'll just pledge to change it to "Andy" in the second edition. (There's only one Andy, right?).

Why on earth did you write a book of poetry? Why not a sitcom pilot, say, or a recipe book for gluten-rich dishes?

Well the poetry book doesn't preclude me moving to Hollywood or gluten-world; after all, the Coen brothers were a famous Montreal poet before they hit it big. Wait. Wrong Cohen. Well, there ARE plenty of poems about pizza. Probably. In all honesty, I like writing poetry--like it as a way of organizing my experience of the world. I think that it enables me to articulate fragments from this experience--things I've felt and learned about, as well as phrases and ideas that obsess me--in a compelling way.

Let's say I hate poetry. Point me to some poetry books--ex- or including Re:union--that will change my sour tune.

You're not alone, and I love this question because I'm a closet Book Club Czar (having never belonged to a Book Club). If you wanted to become H8R Free, you would do well to start with David Berman's Actual Air. It's wry and catches you in the gut or throat (your pick), and since I'm not writing a blurb I'll stop there. Other potential tune-changers include Brad Cran's Ink on Paper, anything by Elizabeth Bishop (full disclosure: I did one of those quizzes that make their rounds on Facebook, "Which Poet Are You?", and got Bishop. As I said, two parts narcissist), and Mike Spry's Bourbon & Eventide. If you're short on time, go read Kayla Czaga's poem, "Victoria Soto," in a recent edition of The Walrus. If that doesn't do it, maybe nothing will.

Oh, and yes--I hope that Re:union might change your mind. I'm after a reader who need not bring a host of formal poetry knowledge or interest to the table, and whose (possibly) negative associations with the form I aim to challenge.

The "re:" theme implies "in regards to" but also connotes repetition of and return to. What the heck are you trying to get at here, Geordie?

Re: "re"--I hope I'm not being too clever (a fault). You're right on with the memory and repetition reading. When I was a young jerk, I was sure I would someday become a famous writer. So I read the work of other young jerks who did become famous writers (Jack Kerouac being the prime example for me). Kerouac was constantly writing and revising his autobiography under the guise of a new novel, so I felt that cataloging my impressions of the world was the only way to write. That nostalgia + gossip about yourself=Art. This equation has since been complicated by/for me, but I can't help but sometimes return to it.

The repetition (of certain words, concepts etc.) is a way for the collection to cohere. I wrote something in the Literary Press Group entry about "recoding," so there's another "re" for us to include.

The "re" also invokes "in regards to" (as you note), like the reader has raised something to which I'm responding. And I've been drawn to prose poetry (with some words left out) as a way of addressing my memories and the more immediate stuff. Nearly half of the poems in Re:union are formatted as letters. Letters appealed to me as a model because they allowed me to get over the self-conscious sense that poetry was an outmoded genre. In other words, I doubled down on the outmoded'ness. And despite the ascendance of email and other communicative avenues (maybe because of?), people like writing letters. Like poetry, they are performances meant to be overheard and something more personal, but no less easy to understand.

You've been active in the Halifax comedy scene, but are also active in academics, and now here's this book of poems by you. Can you describe the weird bubble triangle made by the Venn diagram of these three spheres overlapping?

I'd love to say that this "weird bubble triangle" is seamless, as if it was a model for intellectual and creative labour. It's not, of course, although it's hard for me to deconstruct them regardless. There's humour in my poetry, but it's not a bit. My poetics are informed by my critical writings about poetry, not to mention my book 'learnin more generally. Like there's literary or philosophical allusions in several of the poems, which help add depth to what are otherwise fairly short set pieces, yet you don't need to "get" these allusions to have the poem affect you. I hope? Someday I'll read my poems at Yuk Yuk's and demand that the audience writes a reflective essay on the performance which I'll then grade. That would probably make the overlap more weird though.

You're hitting The Bookshelf a day shy of National Poetry Month, what role--not to put you on the spot too much here, man--do you see poetry playing in this nation we're currently in?

Raising the public profile of poetry is a commendable aim, no doubt. I think we just need to be attentive to how poetry is calling out to a public because from a political perspective--it is International Workers' Day--I think it's dangerous to instrumentalize poetry. There's the temptation when answering such a question to do something to this effect. To say that poetry "saves lives" (as the headline in The Coast on NPM put it) or something equally dramatic that doubles as a value claim. I guess if I re-frame the nation as an entertainment state, then poetry is competing (as your second question implies) with other genres, such as movies, novels, and even cookbooks. From a market standpoint, it's losing. From a social standpoint, it's worth claiming that poetry is a form that is well-attuned or well-adapted to the inundation of narratives and narrative fragments (bits of information) to which we are exposed on a daily basis. That reading poetry pulls us out of this digitized narrative space, encouraging us to slow down, and ruminate upon or return to certain and uncertain words. I suppose I might be saying such things because I often write short poems which want to be social.

More than once you make reference to know-it-all Slavoj Zizek. Are you aware that there was a time when he was the most stolen author in our bookstore? Why would people be jerks like that? And what are you--as a public figure now--doing to help or hinder this type of garbage behavior?

Property is theft, as a slogan from Proudhon that Zizek often steals puts it. I will not, however, align myself with these bookish deviants. If they're reading these words: STEAL HIS BOOKS FROM AMAZON. YOU HAVE NOTHING TO LOSE BUT YOUR SUPPLY CHAINS.

If you had to pick a line-up for a slo-pitch team, and the poems in Re:union were players who'd showed up for tryouts, which ones would you pick for your team?

I think that the only appropriate way to handle this question is by assigning my poems the identities of players featured in The Simpsons softball episode and then resorting to plot points or sports cliches as rationale (NB: The batting order is based on where I would bat the players. I'm already taking this question too seriously). Accordingly,

1. "Field Notes" as Steve Sax--a bit mysterious, like those unsolved murders Sax is accused of committing.
2. "9 Things That You Never" as Ozzie Smith--"a real team player"
3. "Zero Dark Thirty" as Ken Griffey Jr.--the most, um, 'heady' poem in the collection.
4. "Reunion" as Jose Canseco--the theme of rescue; oh, and I also took a lot of steroids while writing it.
5. "Inaugural" as Wade Boggs--a poem that could start a bar fight.
6. "Baggage" as Don Mattingly--what some would describe Mattingly's sideburns as (i.e. "baggage").
7. "A Rival" as Darryl Strawberry--"gave it everything we had out there tonight"
8. "Airport Refrain" as Mike Scioscia--Scioscia learns a harsh lesson about "cause and effect" in the episode.
9. "No Hands Clapping" as Roger Clemens--"no one should ever clap for Roger Clemons."


Re:unite with your new favourite book of poetry in the back of the bookstore, Thursday May 1st at 6:30pm. Be prepared to write a reflective essay afterwards, which Geordie will grade.