Learning to Share: Media & Modernity
Bookshelf twitter
Follow @bookshelfnews
"Through her own experiences, Urquhart seeks out the elemental in the circumstantial, the universal in the personal… t.co/1FIto2jeE8

A Stuffed Crow, a Sock Monkey and a Baby Doll walk into the Woods... 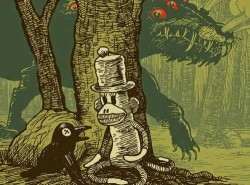 Maakies with the Wrinkled Knees, The

Tony Millionaire's Maakies comic strip has been running for 20 years now, chronicling the debauched, depressed, repugnant, bleak, diseased adventures of Drinky Crow and Uncle Gabby. Maakies is murky and not for the feint of heart, but it's also hilarious and smart--an equal to Calvin and Hobbes for how lovingly drawn and intelligently written it is. The knife of Tony Millionaire's mind might be rusty and filthy, but it's also scalpel-sharp. Even if Millionaire's sense of humour and despair isn't your cup of booze, his woodcutting-like pen and ink prowess is impossible to deny. If you're not directly familiar with his work, surely you've encountered his portraiture somewhere or another. He has an antiquated sensibility, is drawn to old Victorian houses and ships in bottles and ornate glass door knobs. This slightly arcane, seemingly proper visual sensibility worked and still works in consistently interesting opposition to the crudity and cruelty of the Maakies reality it depicts. At first blush a Maakies spin-off, Millionaire introduced Sock Monkey in 2001. Drinky and Gabby ostensibly appear, though rarefied and plush versions of those ne're-do-wells, the "toys" of kind, young Ann-Louise, who lives in a roomy Victorian home based on Millionaire's grandparents'. Though still a grump, Mr. Crow is a far cry from the drunken self-annihilator Drinky, and, aside from the hat and the simianness, Gabby shares little in common with his vile Maakies counterpart. Really, Sock Monkey is worlds apart from Maakies. "Sock Monkey is me trying to rise above all that bullshit," Millionaire has said of his departure, "to be more poetic, looking at the bright side, remembering the things that used to delight me as a child." Many of Gabby and Mr. Crow's--with their baby doll friend Inches's--adventures take place indoors, where they interact elaborately with the commonplace details of the old home. The prismatic light cast by the glass door knob, the old grandfather clock in the hallway, the model ships in the study. The discovery of the chandelier in the foyer elicits Gabby's purple wonder: "Zounds! A castle hanging int he clouds!! A succulent starry place!! Crystalline halls, sparkling corridors! Hmm... Dare I traipse through heave's constellated wilderness?" Their world is animated--as they themselves are--as it might be by an imaginative child passing time in a many-roomed, many-detailed house. The Sock Monkey adventures are sweet, filled to the meniscus with the senses and sensations of being little. The art, the quaintness of detail, and the diction suggests classic children's books, stories of how large the world gets when put under the microscope of idle wonder. Whether of not it's suitable for children depends on whether or not you're willing to accept that your child is smarter and weirder than you maybe give them credit for. Really, the worst that might happen is your squirt begins to say things like Zounds and Gadzooks or take an interest in scrimshaw. Into the Deep Woods arrives on the heels of a beautiful Treasury of the 11 Sock Monkey books, and is a departure from the past decade of visual storytelling. Millionaire has teamed up with Matt Danner, who chums around with the Disney and Pixar folks, to create a long-form prose adventure. This new story is something of an origin story, where we find out how the toys were enlivened and how they found their way to Ann-Louise. Millionaire's art is consistent throughout, but it rides shotgun to the story. This may to a bit of a letdown to readers who come to the book out of an all encompassing, Maakies loving love for Millionaire. But for those who who are thoroughly charmed by Sock Monkey for Sock Monkey's sake, Into the Deep Woods is a worthy addition to the story. Find Ann-Louise gone, worried she's been taken by the beastly Amarok, they set out on an adventure--"Forge ahead!" becomes the toys' motto--through the woods, under the water, into the air, where they encounter sea monsters, bear inventors, and harpies, and always just narrowly duck the Amarok. Of all the Sock Monkey books, Into the Deep Woods gets the closet to being best suited for kids. Millionaire's eccentricities are still present and sturdy, but the addition of Danner goes a ways to making the story more inclusive, opened it up to younger readers. Maakies loving, older readers can still get into it to, but they'll probably have to go in on their hands and knees. - Andrew