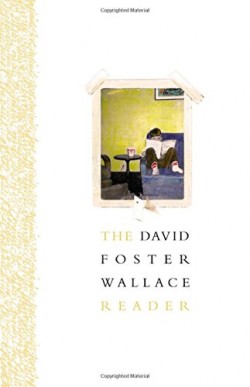 The risk with reverence and legacy is that something happens to our willingness to engage. The work is transformed from an organic thing into a stolid, matte monolith that so many readers will just monkey up to and cautiously touch before scampering away again. The idea of David Foster Wallace is much more daunting than the work itself, which is loving and curious, and so thoroughly alive.

Six years after his death, The David Foster Wallace Reader arrives as a somewhat complicated tome. At first blush, it feels like a looming, lifeless statue, a memorial, securing DFW's legacy as a giant of literature. But getting inside and jumping around in it, this sampler of a three decade career feels somewhat like crawling through the veins of living whale: though mind-boggling and huge, the work of DFW is a blown up version of our own mechanics. Hopefully, the Reader will prove to the leery or the over-reverent readers just how readable, how accessible DFW is. Hopefully it make those giant veins less intimidating.

For those already comfy with DFW's career, there's not much in the Reader that you won't already have in your library. There is "The Planet Trillaphon as It Stands in Relation to the Bad Thing," DFW's first published story from 1984 - a hard to read story about a young guy struggling with being altered by anti-depressants - as well as a section of Teaching Materials that one might want more of and with more context.

Beyond the obvious loss and tragedy, one selfish lingering bummer regarding the death of DFW was he was becoming more and more readable. Consider The Lobster, DFW's final collection of non-fiction, reads like a complicated person finally starting to learn how to express the enormity of his thoughts and feelings to anyone who'll listen. "Good teachers," writes DFW's mother, Sally Foster Wallace, in the introduction to Teaching Materials, "are those who so love their subject that they try with all their might and main to help students love them, too, forever." And I would use this quote to help calm anyone dreading what they see as the task of engaging with the work of DFW. It's all love, you guys. Love and the joy and confusion and hurt that results from loving anything so much.