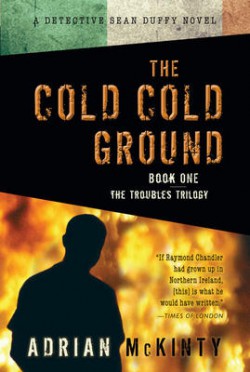 Mckinty blew Rankin’s doors off not just because he has to check under his car for explosives each time he drives but because he has created a complex, sophisticated loner (as all good detectives are) who is just trying to make the world a better place but keeps on stepping on the wrong toes.

And the wrong toes are everywhere in Northern Ireland in the 80s. There are so many factions, rules and regulations inside the terrorists (or shall we call them freedom fighters) that it makes Al-Qaeda and Isil (or is it Isis?) almost understandable. I realized very early on that I basically knew nothing about "The Troubles" and appreciated Mckinty’s fictional map of a very fractured land.

In The Cold Cold Ground (Book One) Duffy is tracking down a serial killer of gay men. Homosexuality was illegal in Northern Ireland then and a really big no no for the IRA. I Hear The Sirens in the Street (Book Two) finds Duffy investigating an IRA assassination with ripples in big business and in In The Morning I'll Be Gone (Book Three) Duffy has to find an escaped IRA master bomber who also happens to be an old school friend.

Duffy is a busy guy but when he’s taking time out he listens to opera and reads critical theory. His take on popular culture of the 80s also brings back lots of music and Margaret Thatcher things – very entertaining in hindsight. You’ll find your time with Sean very hard to resist!