Bookshelf twitter
Follow @bookshelfnews
"Through her own experiences, Urquhart seeks out the elemental in the circumstantial, the universal in the personal… t.co/1FIto2jeE8

Nothing Fancy: Unfussy Food for Having People Over

Fraiche Food, Full Hearts: A Collection of Recipes for Every Day and Casual Celebrations

The Food of Sichuan

Named one of the most anticipated cookbooks of Fall 2019 by Bon Appétit, Eater, Epicurious. An essential update of Fuchsia Dunlop's landmark book on Sichuan cuisine, with 200 recipes and stunning photographs.

The Art of Living According to Joe Beef: A Cookbook of Sorts

The Instant Pot Bible: More than 350 Recipes and Strategies: The Only Book You Need for Every Model of Instant Pot 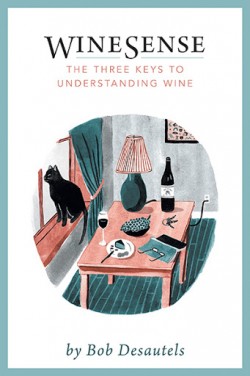 I sat down for a beer and talked wine with Bob Desautels. Over the hour, we covered his own transition from drinking whatever Big Three beer was available to him as a teen, to slowly discovering good wine as an underage student in Montreal, to his experiences making the stuff himself. "I made my own wine for about ten years," he says. "What's that old saying? About life being too short to drink bad wine?"

We covered his spates spent as a professional golfer, philosophy student, teacher, restauranteur and, now, author. As Desautels was ordering his second pint, we were joined by a friend of his fresh from a visit to a familial wine cellar abroad that she was starting to sort through. Her relatives had been collecting wine for the better part of the century, but the husband had passed away and the wife was not going to quaff the remaining collection. She had taken pictures of some of the labels and wanted Desautels to have a second look.

Desautels didn't temper his enthusiasm, scooched closer to the laptop to scroll through the images. "That'd be a great one." he spotted right away. "Château Gazin. 1961. That's the year of the century for Bordeauxs. '61."

A subtly tragic thing, it occurred to me. The revelation of most aging collectors of anything is their inability to take their collection with them. The best analogy I can come up with is a kid who gets a toy and chooses to keep it in the box, to collect it instead of playing with it. Sure, the value is increased, but why have a toy that you can't play with? In WineSense, Desautels manages to smooth this contradiction. Good wine drinking, he argues, is a balance of knowledge and interaction.

Spending the first half of his 20s as a professional golfer, Desautels came to Guelph at 28, in the early 80s, to do a Masters in Philosophy. There he took a teaching assistant job in the Bachelor of Commerce Hospitality Program, marking papers and organizing wine tastings. After two years, he was offered a full time position, teaching the history wines, beers, and spirits.

"Twenty-five percent of the class were dead serious about learning about wine," he remembers. "The rest thought it would be a fun course where they'd get to taste a lot of wine. It was much looser than it is today with third party liability. I'd appoint five students for every tasting, to do the pouring, and afterwards we'd go back to my office and there'd be half a bottle left of this wine or that wine. We'd go back with some of these wine experts, a lot of whom were trade guys, real characters who'd been selling wine for most of their lives, and we'd sit around and finish the wine and tell stories."

In its calm concision, WineSense benefits from Desautels time spent teaching. He leavens  what can often come to feel like dense erudition. Some experts, he writes in the introduction, "seem to squeeze out all the enjoyable aspects of wine. The wine itself – and all the pleasure it brings – gets lost in the analysis." With the casualness that experience affords, Desautels breaks his book into three keys: The Basics, The Grapes, The Approach. "The book is an homage," he says. "Wine goes back to the dawn of civilization. It's a key part of major cultures, major religions, and it should be celebrated.

"The reason I like the tree keys," he says, "you need to know the basics about wine like you would anything else. If you know the few basics, you literally just need to learn 8 to 12, up to 17 grapes and you've covered all the quality grapes in the world. The wine makers makes two major decisions – do they want to make a blend, or use just one grape? And then are they going for quality or quantity and value.

"Like literature," he says, "it can be a complete turn off when people just use jargon. Over the years, my wife and I have [had] friends who take two or three wine courses, and you go to their house and they open up wine like it was something precious. You all say it's nice, but then the whole night becomes, Well, I'm really getting a strong liquorice taste here, and it takes all the fun out of it.

"I think wine should take you into very good discussions that are not trivial," he says. "Because I hate sitting around at a dinner talking about how much worse this winter is compared to the winter before. We all watch the weather report, we know this stuff anyway. But wine does seem to get people into discussions of literature, or politics, and stuff that's often taboo, but which is some of the most important stuff to talk about in life."

As a guide, WineSense is unimposing. It has the simple but heavy-lifting prose of mid-century guides, with Gillian Wilson's illustrations helping to define the casual refinement of that era. It's a companion more than an instructor, written with the assumption that you're already drinking and enjoying the stuff, and might like to articulate that experience with more context, whether historical or agricultural or biological. Once you've got the history and the technique down, you can enjoy the effects. And certainly WineSense is riddled with reminders that the point of wine is celebration, helping to open up and and enliven a get-together.

"Here's the one that will cover your travel," Desautels stops on a label. His friend has been flying back and forth from Canada to London to help out with the collection. "1959 Château Latour. If we can look at the ullage... Sometimes you can't see. I don't know how dark bottles were in those days... And this looks like a Mouton Rothschild."

"It is," his friend confirms. "There are about seven of them. Their labels are gorgeous."

"You know the history? The Rothschilds Family commissioned a new artist every year. Including Picasso, Andy Warhol... Warhol did 1975 Château Mouton Rothschilds, and this guy I know had some bottles signed by Andy Warhol. And it's the most tragic story. He had some Château d'Yquem stored above, and the cork deteriorated, spilling the wine and ruining the signature."

"Well," his friend muses, "it just shows how ephemeral it all is."

We talk about the risk of knowing when to open a bottle, never exactly sure when the drink's at its best. "Wine goes through the same stages we do," says Desautels, "They're too vigorous when they're young, too tannic – out of balance, you know. Then they mature, and there's a point where they're perfect. Then they become frail, become watery."

Desautels raises the idea of organizing a tasting, and then the tone of the perusal changes. Going through the bottles now, he's animated not just by the histories of these half-century old wines, but by the possibility of getting together with friends to crack some of these chestnuts open.