The Worm: The Disgusting Critters Series

A hilarious opportunity to find out more about an often-misunderstood creature!

Learn more about this much-maligned creature!

The Fly: The Disgusting Critters Series

There is more to this bug than meets the fly!

Slimy, but fascinating facts about a bizarre critter!

Don't be afraid to learn more about these incredible bugs!

Get to know an underappreciated member of the animal kingdom!

The Twelve Days of Christmas

How the Grinch Stole Christmas! Grow Your Heart Edition

The Twelve Days of Christmas

Made With Love From Me at Christmas

Future Love: Hold On To Your Reluctant Readers 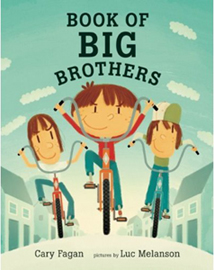 When my sons were little I would read the newspaper to them as they chewed on their little fists. A little later, they flipped the pages of colorful, poetic boardbooks, or entertained themselves with smooshy bathbooks on car trips. At bedtimes they would become so still reading books like the gorgeous eco-counting book The Water Hole. And then, in the awkward transition from beautiful picture books with simple narrative to more involved storytelling, I lost a reader. In my attempt to give him back this great skill/pleasure/mode I had to do a couple of things: first, take gender-neutral political correctness out of the equation, and then discover books that fulfilled the imaginative cravings for humor, belonging, and heroics.

Cary Fagan's Book of Big Brothers is a fantastic book written from the perspective of the youngest brother and filled with images of dirty bike rides, backyard honouring of lost pets, or the collective nail biting over a broken statue after fun-filled play in the living room. Nowhere here are parents, just the beautiful, charged dynamics of brothers. I also love this book because it has tons of lyrical text.

The Skippyjon Jones series is a hilarious read-aloud. It provides a pretty serious pleasure hit to listen to tumbles of giggles as you follow SJJ, the large-eared siamese cat who thinks he is a chihuahua, taking on various challenges with great verve.

In Elliot Jones, Midnight Superhero, a supposedly shy, docile, and well-behaved boy bursts on the midnight scene in top renaissance superhero form to save the world from one disaster after another.

How Rocket Learned To Read is a full-colour motivating tale that unlocks the code of reading for children. So often it is assumed that kids will just roll with the whole "symbolic language" thing. Entranced, you will watch as Rocket practices his letters and then words over and over, waiting with great anticipation for spring to arrive, carrying with it his teacher "little yellow bird." Highly recommended !!

Julia Donaldson is lyrical and action-filled--not one miss on her list: Snail and the Whale; The Gruffalo; Room on the Broom, The Troll, and more.

And of course, in the last breath of giving over, Star Wars early readers.

Really, it is the equivalent of serving hotdogs in the interest of kitchen table harmony, but it is worth it to have the reader on my right cuddled back in.