RT @globalecochange: every time we are about to go into lockdown I panic buy books & wine from @Bookshelfnews Today I'm ordering Goldigg… t.co/HMg2Fw1CiV 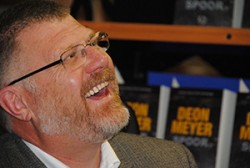 It’s 9:55 in the Capetonian Hotel, Cape Town, South Africa, and I’m slightly nervous waiting for Deon Meyer to arrive. And in he strides, tall and handsome, holding his bike helmet. Meyer is South Africa’s top crime writer and in 2010 his book Thirteen Hours was one of five books nominated for the International Dagger Award. He was competing against Stieg Larsson’s The Girl Who Kicked the Hornet’s Nest. Meyer made me feel so comfortable that my nervousness disappeared as soon as he sat down.

Minett: Deon, have Stieg Larsson’s books been a tipping point for the reading of crime fiction?

Meyer: No, there has been a marvellous growth in the past five years. Michael Connelly is always on all of the bestsellers lists. Larsson’s influence is more about opening up foreign markets.

Minett: Why do people read crime fiction? Do you think that it helps us look at our dark side?

Meyer: All literature helps people look at their dark side. If it’s good it holds up a mirror for the human condition and sometimes mirrors make us squirm. I think people read crime fiction because we live in a world that is not always just. If you read someone like Lee Child, he is a great storyteller. His character Jack Reacher is a steadfast man. We’re all looking for the principled man. Crime writers are a small group and we love each other’s books. There is probably less jealousy amongst crime writers than any other genre.

Meyer: I’m a great believer in there but for the grace of God.... I don’t know how to say it—I have a real thing for people. I have a theory that you only feel real empathy when you can discover real problems in yourself. Coetzee, for instance, is ruthless in his portrayal of humans but it doesn’t mean that he doesn’t empathize. Great authors challenge their readers and explore humanity in ways that make the reader feel uncomfortable. An author with an agenda always fails. Being human is such a fragile state.

Minett: Your character Benny Griessel perspires, daydreams about being in a rock band, has serious problems with alcohol, divorce...a lot of trouble navigating his life. Is this why he’s popular?

Meyer: He’s a representation of the ordinary guy...he’s most of us and battles to manage his life. Most of his troubles are self-inflicted. He knows that police work is not good for him but he loves it. He knows that he is not the best of fathers but he still needs his kids’ love and approval. He misses the touch of his wife and yet he needs to be held. There has been in-depth research about police and alcohol. Many in the police force suffer with post traumatic stress disorder and they use alcohol to compensate. Also, it is a high-testosterone environment with manly domains. If you are a real man you hunt, drink, fish.

Minett: Could you comment on gun culture in South Africa.

Meyer: South Africa has a hunting culture, not unlike the U.S. It is part of its history and heritage.  Forefathers had to tame the land with Bible and rifle. Safari is important to tourism and if it is done sustainably I have no problem with it. I personally am not in favour of hunting animals that you are not going to eat, but to each his own. I love game. I think that South Africa is part of a nature culture. We are very involved with the outdoors.

Minett: After researching your book Blood Safari, which takes place around Loxton in the Northern Cape, you became involved with I Am The Living Trust. Could you tell us something about it?

Meyer: Sixty percent of the children are learning-impaired because of fetal alcohol syndrome, malnutrition, and abuse. We wanted to make a difference in an impoverished community and the best way to do that is at the school level. All the children were malnourished so we instituted a meal program which has been very successful. The classes are too big and so we have hired more teachers. There are so many roadblocks. We work with social services and sometimes have to take children out of the family. We are committed to hiring affirmative action social workers—people who have lived in and understand the community. There is huge unemployment and we are working on employing cooks and gardeners.