REVIEW: BLAZE ME A SUN 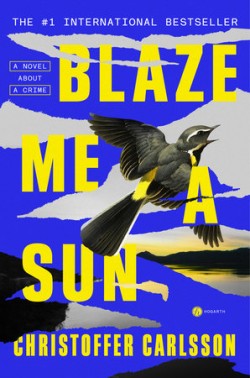 Blaze Me a Sun: A Novel About a Crime

Crime fiction is often judged by two criteria: how well-tied the knot of the plot is and how deftly it gets untied. No matter how mucky the morass of events, readers can take comfort that behind some of the most terrible things lies reason. There will be a motive. Disassemble the chaos of a crime, and there you have order. Indeed, literature's first detective, Poe's ratiocinator Dupin, needed only to officiate the union of reason and intuition to arrive at his conclusions. While this parentage has snarled and complicated down the generations, the promise of neat resolution is still at the core of the genre.

Of course, this is the promise of fiction in general: knowability. Through either the puppet's first person voice, or the lit deity's third person omniscience, fiction orders and dramatizes the contents of a person's mind and heart. There are reasons we are who we are and why we do what we do, and here they all are put into action. Tested and altered--or perhaps unchanged. Messy and contradictory though we might be, fiction assures us that we are explicable, orderable.

In reality, what is the process of understanding another person, or even understanding ourselves? Our access to others is restricted to what they tell us about themselves. Otherwise, we're left to imagine the mechanisms that make them tick, that inform their actions. We are even limited in self-knowledge. Often, we simplify ourselves into stories about ourselves--arrange ourselves into some clean, fictive order--while ignoring or hiding our apocryphal aspects. The same goes for cime. The expected solvability of crime fiction belies the statistic that nearly half of all murders remain unsolved. Motives behind and perpetrators of life-altering crimes forever unknown.

This intersection of the writer and the detective, and the difficulty both face in rendering a realistic picture of reality, is depicted stunningly in Christoffer Carlsson's Blaze Me a Sun.

Not to be mistaken with a "crime novel," the American debut from the Swedish sensation differentiates itself as "a novel about a crime." Here, a writer flees divorce for his childhood home in the south of Sweden. There, he has a few chances encounters that disinter a series of crimes from decades ago and the effect they had on those close to them. In particular, he finds his way into the mind of Sven Jörgensson, the police officer who found the first victim, near dead. As the years pass, and another similar crime is committed, and another attempted, Sven is consumed both by his drive to solve the case and his failure to. There's no shortage of clues and suspects, but they simply won't amount to anything simple.

Blaze Me a Sun is a compelling look into the damage done by devotion and obsession--at times a fine rival to the standard bearer, David Fincher's Zodiac. But what sets Carlsson's novel apart is the framing. The mystery is so compelling that the reader easily forgets that the story is one specifically being told. The reader forgets that there is a writer behind it all, that the book began in first person--with an I--before donning the cloak of authoritative omniscience. Where does this insight into Sven's deterioration come from? How does anyone know this man's secret thoughts? How does anyone know what drives him to take the actions he does?

At the risk of hyperbole, I'd wager Blaze Me a Sun is the perfect crime novel. It at once delivers on the twisty, page-turner front, while also thinking quite seriously about how fraught and complicated the whole endeavor is. The details of a crime will always differ from incident to incident, but the mystery is a constant: people. What the hell are any of us thinking?

"There is no limit," the novel assures us, as it nears its conclusion, "to what we don't know."