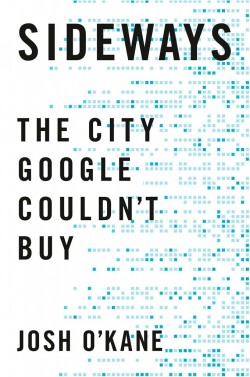 One of the pleasures of browsing in a real bookstore is happening upon a book that you weren’t looking for. This is what happened to me when I peeked at Sideways: The City Google Couldn’t Buy.

I suppose it attracted me because the housing crisis is such a pressing issue everywhere. So important, and yet so encumbered by problematic and elusive solutions. Also, to be truthful, I love seeing big tech being brought down a notch.

Larry Page, founder of Google, and of course one of the main characters always lurking in the back story, is the first man on stage. I have come to think of this as a Shakespearian drama—characters bigger than life, with huge foibles and hubris, tripping over each other in every chapter (or scene).

Page is the guy who said that he has a “healthy disregard for the impossible.” That’s why Google had this huge department called Moon Mission and within that a company called Sidewalk Labs. Literally millions, or more likely billions of dollars was spent trying to come up with wild and wacky solutions, particularly for urban landscapes. We learn later in the book that Google (or the parent company now called Alphabet which housed Sidewalk Labs) thought about putting a dome over the 12 acres that they had bid for on the Toronto Waterfront. They also touted their plan as being an integrated environmental and digital panacea. Sounded good on paper.

This bid had been put out to tender, but there were subtle assertions through the book that Trudeau, who courted Eric Schmidt, another Google bigwig, was, let’s just say, really behind the project and in fact, perhaps put pressure on the city to announce the winner prematurely because Trudeau, Schmidt and Doctoroff  (CEO of Sidewalk Labs) were in Toronto on the same day. Think photo op.

So here it gets so confusing but at the same time beautifully laid out by author Josh O’Kane. Enter another character called Waterfront Toronto, which is an entity funded by the province, the federal government and the city. It has a board that is part entrepreneur, part watchdog. Lots of different characters.

Plot so far: Multi-billion dollar gargantuan company Google, which “holds” a company called Alphabet for a multitude of confusing reasons, has to negotiate with Canadians who are on a board called Waterfront Toronto. These are careful Canadians, unlike their American counterparts who want to move fast and break things. The plot thickens and gallops along.

Such a fascinating look into development processes, internal struggles within boards and companies, data collection, consensus building – or not.

This story is ripe for a TV series. I’ll give you a heads up on a couple of reasons that the deal collapsed. Google, or Alphabet, or Sidewalk Labs wanted way more than the 12 acres that they bid for. The math didn’t make sense for them if they weren’t allowed access to more. There was also the very, very, huge issue of data collection and money made from that.

So many meetings, so many resignations, so much tension. Sideways gives Succession a run for its money!