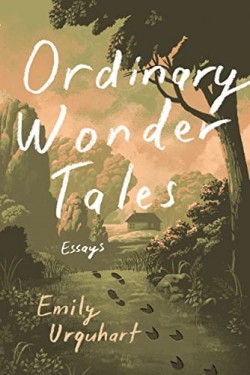 Emily Urquhart’s Ordinary Wonder Tales opens with “an inky fluid mass” materializing on the ceiling above a three-year-old in bed. “The ink blot is made of air, or water, or maybe gas… in its darkness and its size and also its rippled movement” it resembles a stingray.

This childhood haunting—Urquhart is the toddler sleeping beneath the dark, gaseous ray—kicks off an utterly unique but fundamentally relatable collection of essays. Through both personal experience, the experiences of others, and scholarship, Urquhart reveals the wondrous to be ordinary and the ordinary to be wondrous. At the initial appearance of the blot—later named Something’s the Matter—you won’t be able to put the book down. Unless, of course, you have to.

I had only just begun Ordinary Wonder Tales when my three-month-old, who had finally begun sleeping through the night, began his four month sleep regression. It was as though the little booger finally became aware of the web he was on and would bolt to attention at every shiver. The hand I'd been able to hold a book in while he contact-napped now had to be metronoming his little keister to try and keep him down for at least one precious sleep cycle. And so I had no choice but to leave little three-year-old Emily Urquhart in bed, staring up the rippling patch of Something's the Matter.

Sleep has not become easy, but it's settled enough to afford some time to return to Ordinary Wonder Tales, to the haunted bedroom, to a childhood where the author, like every child, "believed in everything that existed and everything that did not." The other children who, independently, were haunted in that room, carried the memory into their adulthood as well. From that bedroom, the author travels to a summer camp in Huntsville, where she's tasked with seeking out and erasing from the cabins every iteration of "the name of the vilest sexual predator that my country has seen," an experience that later in life will snarl with the old ballads in which women have no chance of survivng and episodes of Law & Order: SVU. And from there, she finds herself in England, conducting field work to better know the people of the land by what they left behind. And then on to the east coast of Canada, where interviews with the denizens reveal the ways in which we all inhabit classic, narrative roles, always shifting but always adhering. And then to 150 Dorset St. in Port Hope, where "the radioactive matter we've dredged out of the earth" will outlive all of us.

The essays in this collection are intimate, but they're also collective. Through her own experiences, Urquhart seeks out the elemental in the circumstantial, the universal in the personal. She ties her own, and, inevitably, the reader's own experiences to a great human heritage of life-living and storytelling. During the early days of the pandemic, for instance, Urquhart navigates the fear of the contemporary unknown by gathering plague legends. “You could call my research mythological doom scrolling: the grimmer the legend, the more sated I am. I go to bed only once I've read the worst, most appalling pestilence tale I can find. The news cycle does not offer what I need to hear about humanity, but legends are travellers, shape-shifters, easily following the path of disease and transforming to capture our fears and societal problems. They are the real story.”

As it happens, Ordinary Wonder Tales will have to be set aside once again. This time, it's still the early days of the pandemic, and a partygoer from the cottage next door to Emily's, has gone missing on the water. Equipped with binoculars, Emily's husband sees the drifting man, but then loses sight. "A six-foot person can see about three miles until the curvature of the earth will drop the horizon from view." He'll have to stay missing, disappeared off the edge of the visible world, until my little one gets used to cutting teeth—or at least that's the development we believe is currently haunting the poor bud, causing him to suddenly be up griping all night.

These past few months have been unlike anything else. Each new wonder or hiccup seems so individual. So personal. And indeed, it is. My wife and I have to always remind each other that a world and a body that's old news to us is so revelatory to our son. At the same time, what's new to us as parents, the joys and frustrations and sorrows and frustrations, is nothing new. Midnight searches to help better understand what the matter is reveal an internet full of people going through the same unique thing.