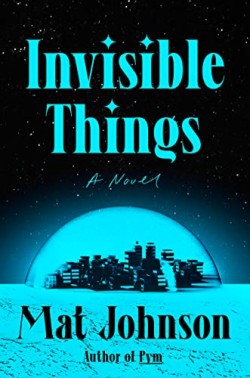 In late-2016, our world felt like it had become totally (maybe irrevocably) overhauled by a reality TV star with an historical love of professional wrestling and kayfabe. Since then, in both politics and everyday life, we've largely reduced others and sometimes been ourselves reduced to either heroes or heels who feel misrepresented by, in the parlance of reality TV, The Edit.

Or, to say it another way, it feels like it's been a hot minute since everyone who lives in the same world has also inhabited the same reality.
In the aftermath of 2016, fiction has grappled with how best to reckon with this new world that itself is a fiction--or at least a world in which a divided people are forever accusing each other of fictionalizing reality. In Invisible Things, Mat Johnson captures (literally) what feels like this precise moment in time. But in doing so, he reveals these rifts, these disagreements over what's real and what's a fib ginned up by the opposition, as more than a consequence of the past few decades, but rather an essential flaw in our design.
Things are already socially tense on the SS Delany (a tip of the hat to inimitable sci-fi writer Samuel R Delany) when crew members Nalini Jackson and Dwayne Causwell, who just happened to be outsiders from The Bobs, the ruling clique of engineers on board, discover an anomaly on Jupiter's largest moon, Europa. A perfect circle. The natural world isn't known for creating perfect anythings. Further investigation reveals that circle to be the perimeter of a dome. After some bickering among the two factions, drones are sent to explore the dome. Discovered within is a full-sized city. Just as soon as the Delany crew discovers the dome, they find themselves within it.
In New Roanoke--a nod to Roanoke Colony, the first attempt at a North American settlement, which had its entire population disappear--the crew of SS Delany finds a perfect replica of American society. The Haves dominate, constructing a philosophy of exceptionalism around their status, while the Have Nots suffer from an inverse assumption, and are generally kept from view. Those descended from the original abductees enjoy the privilege of lineage while recent arrivals must hustle to establish their prominence
Meanwhile, when the SS Delany returns to earth empty, a rescue/reconnaissance ship is deployed (the SS Ursula--hi Ursula K Le Guin!) but its arrival does more harm than good. The Ursula crew finds the Delanys scattered all up and down the ladder of the city. While the head Bob attempts to game his way to the top, Dwayne has gone full radical, attempting to kick out the ladder from the bottom and wake up the entire population to the dubiety of New Roanoke's very existence. Where Bob endeavors to shore up the status quo--which persists and thrives so long as no one wonders too much about why or how they're there--Dwayne is determined to find out what force or intelligence has created this enclosure? What is providing the city with supplies? What are the Invisible Things that sometimes lift people into the air, turn them upside down, and sometimes hurl them to their death? When the Usula slips through the mystery and is able to enter New Roanoke willfully--as opposed to the rest of the residents, who arrived against their will--both factions scramble to exploit the arrival to hasten their end goal.
Invisible Things is a small, fun book that engages with large, heavy things--invisible things, too. Better than any other novel I've read post-2016, Johnson captures the absurdity and severity of how we disagree with, interpret, distort, exploit, or outright occlude what's right in front of us. The nods to Le Guin and Delany and many others also help position the novel among an age of science fiction where the seriousness of the work never comes at the expense of the fun.
Go To Reviews