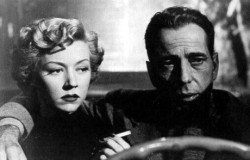 Film noir, a term first used by French film critics to describe certain Hollywood films predominately from the 1940s and 50s. The noir of these films captured the lives of people, often murderous, conniving, or just plain desperate to survive, caught in the shadows of dark alleys, nightclubs or the lonely, treacherous roads of America. The look of these films was bathed in the contrast between night and day, shadows and silhouettes, often voyeuristically peaking through windows and doors hiding all kinds of misbehaviour and mayhem. Stylistically influenced by the German expressionist filmmakers of the 1930s, film noir style and technique can also be seen in many postwar films from France and has been clearly evident in the recent works of American filmmakers like Quentin Tarantino and the Coen brothers.

We open and close this four film series with two of the best known titles of the genre: Double Indemnity and Sunset Boulevard, both narrated by dead men. How perfectly noir! Lurking in the shadow of those two famous films, are two lesser known but highly regarded and influential films, In a Lonely Place, starring Humphrey Bogart and Gloria Grahame (who was recently portrayed by Annette Bening in Film Stars Don't Die in Liverpool) and the brisk but unforgettably intense, Detour.
Hey sweetheart, here's your invite to enter the world of blonde bombshells, femme fatales, gun-toting lugs and world weary gumshoes.