Thank Eric! We care and want to help. t.co/04jSo7sGAD


RT @MikeSchreiner: The Home for Good Campaign is bringing people together to support our neighbours who desperately need an affordable… t.co/24RHCYVl1t

REVIEW: THE MYTH OF NORMAL 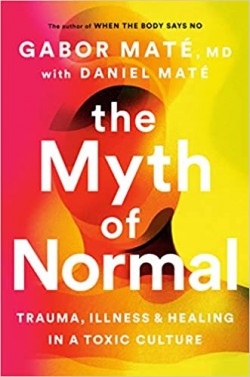 The Myth of Normal: Trauma, Illness and Healing in a Toxic Culture
Look around and you will find it hard to refute Gabor Maté’s belief, expressed in his book Myth of Normal: Trauma, Illness & Healing in a Toxic Culture, that the socio-economic system in which we find ourselves is broken. The evidence is everywhere – from homelessness and addiction to a health care system that is sinking under the weight of burnout and increase in illness, to the forest fires, floods and droughts that are becoming more common throughout the world we communally inhabit.

Maté believes that we are all psychologically wounded to varying degrees and explains that wounds either remain raw or are replaced by scar tissue. The people in our city who are haunted by addiction and find themselves on the street have suffered beyond our imagination. They live in their rawness. The rest of us may have had smaller incursions to our sense of self and our dignity which release stress hormones, which in turn discharge inflammatory proteins called cytokines into circulation. Maté says these can instigate DNA damage. And pain.

He contends that this broken system, otherwise known as late-stage capitalism, is the cause of all the dysfunction that we experience. He illustrates, with countless examples, how children grow up without the nurturing needed to flourish. He lays no blame on parents who are caught in this endless purgatory. As we have drifted away from the intergenerational model there is even more stress for contemporary parents.

There is no blame game here, only understanding.

Maté has been working as a physician on Vancouver’s East side for years and has written several books on parenting and addiction. His son Daniel is co-writer here and has enabled Maté to reveal his own inadequacies as a parent and its effect on Daniel. In the end, it is Daniel who helped his father evolve into a more empathetic and self-reflective person – a person who Maté likes much better than the self he previously constituted. He was highly attuned to others stumbling blocks, but not his own. A very refreshing insight.

The book is research full. Women with PTSD have twice the risk of ovarian cancer. Suppression of anger is statistically related to breast cancer. A Danish study found grieving parents had double the risk of multiple sclerosis. Men sexually abused as children had a tripled rate of heart attack and more high-risk behaviours. Rheumatoid arthritis sufferers try very hard to please. Even though you might be cynical about studies, the data presented in this book is still worth your attention.

Mate describes us as bio-psycho-societal beings and as a doctor is confident that even small changes can help us access our more authentic healthy selves. As he says – with even modest self examination we can access liberation.

He has many tips gained through a more honest engagement with himself and thanks his son for helping him throw off his own driven, unhappy type A persona! His first tip – be kind to yourself and those around you.