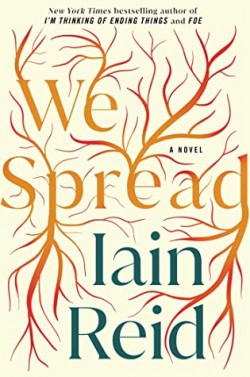 Iain Reid's novels are sort of like Felix the Cat's Magic Bag. Simple in design, extremely portable, but also voluminous--bottomless, ostensibly--and full of you'll-never-believe-what. There are both contents and depths so compelling in his first two novels, I'm Thinking of Ending Things and Foe, that it's hard to avoid jumping in yourself to check out where it all comes from and how deep it goes.

Before Reid turned to head-fucky, bottomless magic bag fiction, though, he authored a duo of memoirs. A Bird's Choice, about moving back home in his twenties, and The Truth About Luck, about road tripping with his grandma. For those familiar with his warm, homey, thoughtful non-fiction, I'm Thinking of Ending Things appeared as a stark one-eighty. Reid's fiction is not sentence-to-sentence creepy, but rather the whole of it somehow emits the sort of low-frequency hum that convinces people their house is haunted.
Reid's new novel, We Spread, reads like a hybrid of his fiction and non-fiction--which is to say that, while unnerving and unexpected and bottomless, the book is also warm in its own way. Loving, even. In the acknowledgments, Reid thanks the staff of the long term care facility in which his grandmother, with whom he previously roadtripped, spent the last two years of her life.
To begin, the aged artist Penny shuffles around the apartment she once occupied with her partner--a "prolific painter of merit and distinction." Where her partner experienced relative success, Penny never had an interest in displaying or sharing her work, never believed she could "produce anything to affect or inspire others." Time in her apartment is frail and imprecise. While she's alone, old conversations still maunder through the space and, even though it's supposed to be vacant, from time to time she can hear whispers from the unit next to hers. As often happens in an Iain Reid novel, reality's resolution begins to stutter, though here it's not clear whether it's Penny's lucidity or something more fundamental giving way.
Found by her landlord after a nasty fall, Penny is taken to a long-term care facility. A stately, isolated place. Six Cedars Residence. Though she has no recollection of the discussion and decision, she's assured that she and her partner agreed upon this course of action before his passing. While there's much to like about Six Cedars, where Penny is one of only four residents--and painter among a musician, a mathematician, and a linguist--but despite feeling more like herself than she has in a long time, the dubiety lingers even as she settles in. The care is a bit too caring, maybe. The interest in preservation of life a bit too strict.
The loss of faculties is terrifying in and of itself, and Reid certainly lets the horror of decline ripple throughout, but that's not the book's primary interest. Instead, We Spread is searching and ruminative, as philosophically engaging as it is unsettling. Art and math and nature mingle and combine and distort. It's as much concerned with the horror of aging as it is with the meaningfulness of it. Above all else, Reid's third novel is an unlikely and convincing celebration of life--both how we spend it and how we lose it.
We Spread is another sort of bottomless magic bag, though not strictly in the way that novels can be but also in the way that life is.
Go To Reviews