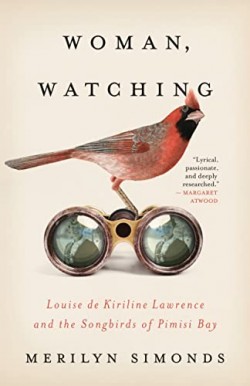 Woman, Watching: Louise de Kiriline Lawrence and the Songbirds of Pimisi Bay
How did someone born into Swedish royalty, whose fame started as the nurse to the Dionne quintuplets, end up living in a little cabin in the woods of Northern Ontario as one of the foremost ornithologists of the 20th century?

As a young woman, Louise de Kiriline left her idyllic life to become a nurse in a Swedish WW1 prisoner of war camp. There she met the son of a Russian nobleman. They married but he felt compelled to go back to Bolshevik Russia to take a commission with the white army. She followed, and the horrendous story that ensued is worth a book and a movie. He disappeared in the mire of war and after months of looking for him she decided to move to Canada.

De Kiriline managed to purchase a plot of land near North Bay. The details and detours of the purchase are yet another story. When it was finally hers, she had a small cabin built by a local tradesman who, believe it or not, became her husband.

De Kiriline was a data diva. Every day for 40 years she took bird walks at dawn, collecting data on numbers of birds--where they nested, how long eggs took to hatch. She became a world expert on the yellow grosbeak, holds the record for counting bird song, wrote six books on birds, the life history of four species of woodpeckers, was a columnist for Audubon Magazine and published numerous scientific articles. For 50 years, academic ornithologists flocked (pun intended) to her cabin.

I had my own small but exciting epiphany while reading Woman, Watching. In June, I was in a chalet in the Beaver Valley. I heard a bird calling out to the world almost without a taking a breath - for hours. I thought it was a vireo but even though I had my binoculars I couldn’t locate it. Very frustrating. Then I read that Louise documented a red eyed vireo which called over 22,000 times in fourteen hours. Aha, thank you Louise!

Woman, Watching could not have been written by a biographer who knew little about her subject’s passion. Merilyn Simonds, herself a woman watching, understands the soul of her subject. Simonds has been a lifelong birder and naturalist. This allowed her own story to be woven throughout. It works because she also has been on the path to discovery and wonder.

A few people live epic lives. Louise de Kiriline Lawrence was one of those people. Others of us may be lucky to read about those lives which are filled with obsessions, intuitions, research and grit. Thank you to Merilyn Simonds for writing this important book.
You can hear more about birding, writing and the joys and challenges of being a woman watching at The Eden Mills Writers’ Festival on September 11 when Merilyn will be in conversation with Madhur Anand, Poet, Governor General Award Winner for Non-fiction, and Ecology professor in the School of Environmental Sciences and inaugural director of the Guelph Institute for Environmental Research and Julia Zarankin who wrote Field Notes of an Unintentional Birder.
Go To Reviews