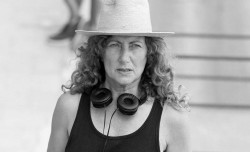 Writer/Director Valerie Buhagiar comes to the Bookshelf Cinema, Friday Aug 26, for the premier of her latest film, Carmen.

Buhagiar began her career as an actress during the Toronto New Wave starring in films like the international hits Roadkill and Highway 61. Her first outing as a writer/director was the short film The Passion of Rita Camilleri that was in competition in Locarno, won a Best Short award at the Chicago International Film Festival and several other international awards. Her two previous features are 2014’s The Anniversary and 2018’s It’s Hard To Be Human have both won several awards and have worldwide distribution. She has been honoured for her work with a retrospective at Karlovy Vary. Carmen is Buhagiar’s 3rd feature film as writer/director.

Carmen is inspired by an old Maltese tradition. When a young man became a priest his eldest sister was to follow him to the rectory and be his maid. She did not get an education, a family of her own, or a salary. Many women’s voices were squashed and their spirits dampened. This happened to my Aunt, now 95 years old. When I last saw her she said, “I had a terrible life, no one cared about me.” And she wept. This film is for my Aunt and all the women who’ve suffered this tradition under the patriarchy. In our film, Carmen is a fiery young girl forced to leave her burgeoning life behind when her brother becomes the village priest. Forced into servitude for decades, Carmen’s childhood secrets, desires, and lost loves are ready to overtake her. Carmen is a sexual, spiritual, necessary awakening of a woman who has so much to say she can ring the bells of Malta with one sigh.