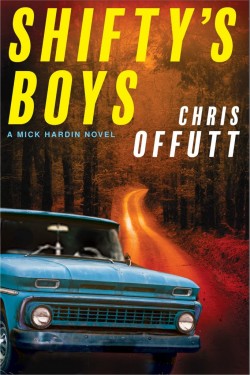 I've never been much of a crime series reader. My suspension of disbelief has always struggled to suspend far enough to accept the idea that everywhere a recurring protagonist goes, someone will inevitably die. (I'm looking at you Jessica Fletcher...) I get that this can be the cost of doing business for a PI or the like, but when civilians continue to have people dropping around them, I'm not always buying it. With Shifty's Boys, though—the second installment in Chris Offutt's Mick Hardin series—something has finally clicked for me.

In The Killing Hills, Mick Hardin, an AWOL Army CID agent, is home to salvage a struggling marriage when a young woman is found dead in the hills. Well aware that the community won't be willing to talk with authorities, Mick's sister Linda, the town sheriff, tasks her brother with getting to the bottom of things. In East Kentucky, you're only as good as your family name, and the Hardin name still means something. Certainly means more than any badge. Mick is back home in Shifty's Boys, living with Linda while his leg heals from an IED attack, and it just so happens that another body is found. A drug-related shooting, as far as the city police can or care to discern. But the murdered man's mother—the titular Shifty—isn't buying the story, and this time around it's her who asks Mick to take another look. Shifty trusts Mick to uncover the truth of his son's murder without disturbing too much of the prized family privacy.
This may be obvious to devotees of crime series, but it seems to me that, for a series to be successful, the crime at the heart of each subsequent book has to be somehow both the most and least important aspect of the book. Most important, because trivialization of the machination of human corruption and suffering can only make for a fizzy dud of a book, and least important because the uncanniness of death following a hero everywhere they go will weigh down the suspended disbelief needed to carry on with book after book.
Shifty's Boys is a fine example of this paradox. On the one hand, the book's inciting crime is quickly tied to a character other than our hero. A parent's loss becomes more important to the book than the fact that someone was also killed the last time Mick was in town. And on the other hand, the death essentially serves as a disruption, swirling up all the settled silt of the community. And, indeed, the agitation of the status quo in this otherwise to-itself Kentucky town is what makes Offutt's Hardin books so compelling.
While the whodunit comes off well in both books, Offutt's intimate, inside knowledge of this place and this culture is the real strength of the series, Hardin and his familiarity with the people and the history and the nature an avatar for the author's own. The Hardin books so far are vivid and idiomatic, rich with character and history. Death and crime are universal and, unfortunately, recurring, but the East Kentucky of these books is so individual and precise that it, more than the generically required crime, will have to itching for another book the second you're through with the last.
Go To Reviews