REVIEW: THE SEA OF TRANQUILITY 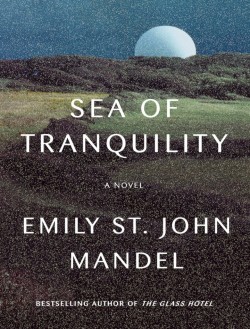 Sea of Tranquility: A Novel

Reviewing The Sea of Tranquility is tricky. Tricky on a few different levels, though.

On the one hand, I'd be remiss to spoil the book's twist. Perusal of the jacket or table of contents will prepare the reader for a few different characters and a few different timelines. But how black sheep Edwin St. Andrew in 1912 relates to a familiar (familiar to readers of St. John Mandel's previous book) Mirella in 2020, and how either relates to individuals and events in the future is not immediately obvious. There is some overlap, some narrative stutter, but the meaning and the source of these glitches takes some time to be revealed.
For me, and I suspect for others, David Mitchell's era-hopping Cloud Atlas came most immediately to mind, where the narrative of the previous story nests within the narrative of the proceeding one. The other near point of reference was Italo Calvino's If on a winter's night a traveller..., in which, similar to Cloud Atlas, different books continue to be bound into other books. In each book, Calinvo plays with a different genre, and St. John Mandel has similar fun here. The new wilderness story, the contemporary chance-meeting story (which readers of The Glass Hotel will appreciate), the soft sci-fi interplanetary ennui story. With both Cloud Atlas and If on a winter's night a traveller..., the book itself is a device for these relations, each chapter a manuscript or story that's cut off by the next, in which that previous story exists as an object. The device reveals itself pretty quickly, but in The Sea of Tranquility, you're left wondering what the connective tissue is, and I don't want to say anything that might spoil that revelation.
As much as the plot is a sensitive thing not to be spoiled, there's also something elusive in St. John Mandel's sixth novel that presents a problem to the reviewer. A spirit that's hard to review. For such a time-spanning, future-imagining novel, The Sea of Tranquility builds its worlds subtly, almost casually. Some things about these futures are different, but mostly the same. Future technology is taken for granted by the narrative as it would be by those in the time period, for whom it would be banal anyway. Instead of bothering much with ephemeral fangles, St. John Mandel concerns herself with the inalterable qualities of humanity.
It's that spirit, the one that St. John Mandel suggests survives far into the future, regardless of pandemic and other disaster, that makes the novel so ultimately moving in a way that's better experienced than expressed.
Go To Reviews