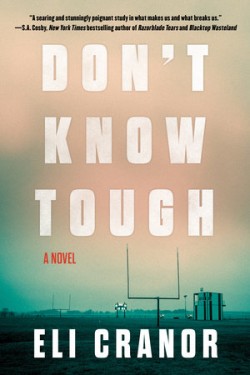 I've never much liked "hard boiled" as a descriptor. It's an associative issue that's particular to my taste, I'm sure. I picture hard boiled eggs is the problem: a shell easily cracked and, if you know what you're doing, peeled free in a few sure moves, revealing the squidgy, dewy innards. I suppose it's this former goo--half-life, half-breakfast--set by the stress of boiling, that does the work of describing the emotionless men that gave rise to this phrasing.

But what about the shell? The protection? We think of eggshells as delicate, frangible to a fault. The opposite of tough. But Eli Cranton's debut crime novel Don't Know Tough, described as "hardboiled southern gothic," got me thinking about this false perception. By design, by evolution, eggshells are strong. They can bear an enormous weight. They need to be strong enough to protect what's inside, but also delicate enough to let what's inside hatch.
Billy Lower is a truck that runs dirty on the bottomless resource of anger and he's the Denton Pirates' only hope of winning their season. And winning the season is Billy's only hope of escaping the home situation that ever renews that anger. The bind comes when that power and anger veers off the road and demolishes one of Billy's teammates at practice. It's an outsized attack on an affluent kid and, in the eyes of the principal, enough to warrant both Billy's suspension and the loss of the season.
In Denton, Billy's long been considered a lost cause, following the same path as his older brother and father before him. The only one on Billy's side is The Pirates' new coach, a Prius-driving transplant from California. Trent Powers is not only an outsider on account of where he comes from, but also because he's the only one in town who believes Billy can be saved. However, it's not pure born-again optimism that compels Trent to stick his neck out for Billy. Winning the season is Trent's way out of Denton as much as it is Billy's. A spate of failing seasons landed him in Arkansas and he's desperate to begin building back his career in order to get his family the hell out of Arkansas. His faith in Billy is enough to avoid a suspension following the bulldozing of his teammate, but when Billy's abusive stepfather, the one who fuels the rage that will take The Pirates all the way, is found dead, there may be a limit to what he can do.
The pressure on both Billy and Trent is enough to boil both their eggs, but I'm not sure whether or not Cranton's debut is hardboiled exactly. Certainly, though, Don't Know Tough is both a thrilling and compassionate look at the needed duality of strength and delicacy.