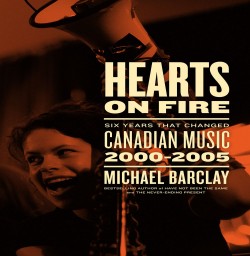 Hearts on Fire: Six Years that Changed Canadian Music 2000-2005
There's a sort of Canadian Noble Truth that runs through Hearts on Fire, Michael Barclay's new book on the "six years that changed Canadian music": the best way to become a well-known, well-respected Canadian artist is to first garner acclaim outside of Canada.
Take, for instance, Hawksley Workman. Little more than an indie darling/curiosity here at home, the incognito Huntsville boy was snapped up by French listeners and elevated to Bowie-level by his second album. In France, he quickly became ubiquitous. A few years later, Leslie Feist's career experienced a similar boost by the French. "Which," she tells Barlcay, "in typical Canadian fashion, then made the hometown industry very curious." Around the same time, the Guelph band Royal City got so fed up with the distractible, chatty Toronto audiences that they tried their luck in the states. The tour was a dud, with the band playing for a few dozen people in total, but it did more for the band in Canada than it did in the States. In retrospect, Aaron Riches says, "I'd always said, 'People in Canadian music are so fucking stupid that if we just go down to the States, they'll think we're doing something.' And it was true! That got us a certain kind of cred in Toronto."
But, in the mind boggling number of interviews Barclay conducted, fame and notoriety never factor as a reason to start making music. Both Hearts on Fire: Six Years That Changed Canadian Music 2000 - 2005 and its predecessor, Have Not Been the Same: The CanRock Renaissance 1985 - 1995 are invaluable records of what small creative communities spread over a massive country are able to achieve without a whole lot of outside support or recognition. The fiery tickers of the title are a nod to the Wolf Parade song, but they're also descriptive of generations of artists who largely make music for making music's sake. Throughout Barclay's book, fame —  in those few instances when it does come —  is more a consequence than goal. On the one hand, it brings professional freedom and validation, while on the other, it compromises the small community aspirations with which most musicians set out in the first place.
The book's focus is, of course, the headliners (the ones, ironically, that made a name for themselves elsewhere), but with the meticulous exploration of the different scenes, the different niches, and the incessant overlapping, it's hard to believe that there's any band formed in Canada from '85 - '05 that don't get some mention in Barclay's book. The result is a sort of conspiracy board: a web of strings and pins that run taut from coast to coast, back and forward, with the occasional sag south or leap across the ocean. Himself a sometimes-member of a few of the niches, Barclay tells the massive story with a person-on-the-ground intimacy. Even covering such a large country, there's usually only a single degree of separation between subjects. As such, the book often feels like a family album. Each interviewee adds a warmth and a closeness and a geniality to the shared story. This is a brick of a book that reads featherlight thanks to reportage that's exhaustive but never exhausting.
Fifteen years beyond the period covered in Hearts on Fire, Canada still seems to require outside respect before taking an interest in its own product, and venues for collecting and exposing far-flung and underground talent are either gone or unrecognizable, but the titualar hearts represented in Barclay's book—those of the past, and certainly those to come—are reliably undaunted by a dearth of outside resources.
Go To Non-Fiction