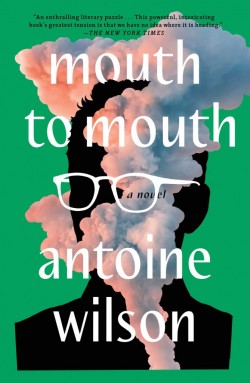 Mouth to Mouth: A Novel

There's a riveting simplicity to Antoine Wilson's Mouth to Mouth.

Two men who sort of knew each other at college twenty years before bump into each other at the airport, both their flights delayed. The more successful one invites the other, our narrator--a writer, it so happens--to join him in the upscale lounge. Over free drinks, he tells our narrator about another chance encounter. It's a story he's never told anyone before, and he's only telling this old acquaintance because they knew each other before anyone of this had happened. Our narrator can attest to his being a good person.
Twenty years ago, Jeff Parker was the opposite of the man our narrator meets at the airport. Undefined, drifting. His life loses all shape when a relationship falls apart while he's house sitting for an actor in LA. In an attempt to pull himself out of his funk, Jeff forces himself out of the house and drives to a Santa Monica beach. When he spots a body in the water, Jeff jumps into action without thinking--a sign of his inherent goodness, he's sure--and rescues the man thanks to resuscitation techniques half-remembered from TV. When lifeguards and paramedics finally arrive, Jeff is pushed aside and all but forgotten in the melee. As the man he saved is loaded into the back of an ambulance, there's what Jeff thinks is a shared look between them, some befuddled recognition of Jeff and the gift of life he's given him.
After that, the less said the better. It's enough to say that the experience at the beach leaves Jeff even further unmoored, while at the same time his interest in the man he saved points his life in a sort of direction. A direction that will land him, twenty years on, in a bougie airport lounge telling a story he's never told before to a struggling writer he sort of knew forever ago.
Mouth to Mouth is told in real time, at the lounge table where the free drinks continue to appear. Jeff's story is half-told to, half-related to our narrator. This simplicity and closeness amplifies the tension of Jeff's story, as you feel it unfolding before you. Clocking in just under 200 pages, not a word is wasted here. Each nudge forward, each interruption to go fetch a snack, creates a cliffhanger. Wilson's novel is a must for fans of Patricia Highsmith and Hitchcock at his most restrained.
Go To Reviews