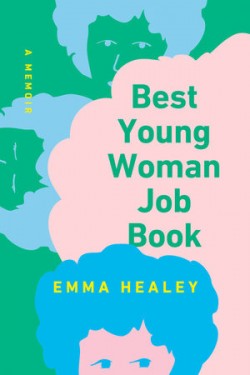 Best Young Woman Job Book: A Memoir
In her first year of university, Emma Healey enters a poem for a school prize and wins. $500. Validation, to boot. Proof her early certainty that she wanted to be a writer was not wrongheaded. At the awards' ceremony, she stands "next to the snack table, filling up small square napkins with sweaty cheddar triangles and dry chocolate chip cookies," stuffing her purse with as many as possible before being discovered. The next day she deposits the prize money. She uses it "to pay next month's rest and then it's gone, like it never existed."
The knot of money and validation as it pertains to a career in writing comes undone frequently throughout Best Young Woman Job Book, Healey's new memoir. The end of a job as a writer's assistant on a TV ends with her acceptance into a prestigious Canadian writers' retreat. "I use my last month's pay to buy a new laptop... I put down first and last months' rent on a new apartment... Then the TV money's gone, like I never had it at all."
Later, she lands a job writing semi-regular articles for a city paper. "I make $250, after taxes, for each piece. Two hundred and fifty dollars is exactly what it is and nothing else. It is both a lot of money and almost nothing. You can spend it in your sleep and you'd be stupid to turn it down, especially if all you need to do in order to aquire it is express an opioon you already have. But it is also foolish to spend more than twelve cumulative hours working on something for a paycheque that will disappear out of your bank account before you've even had the chance to notice it was there. The more time I spend on each idea, the less each one is worth."

For all its recording of the inelegant, uneven struggle to craft a life as a writer, Best Young Woman Job Book is the sort of book that makes readers want to be a writer. Never mind that its rumination on the gig economy, the fickle and cold reality of publishing, and the reliably predacious gatekeepers of Art should be enough to turn both the stomach and heels of even the most stern aspirant, the sureness of Healey's writing and the sharpness of her observations will inevitably blow wind on the pinwheels in the heads of anyone with an inkling towards the pursuit.

To the right reader, reading Healey is like watching basketball or whatever sport: a measured display of joy, technique, and precision that will send you out to try the moves for yourself, oblivious to or in spite of the fact that a career in sports is a statistical impossibility.