REVIEW: EYES OF THE RIGEL 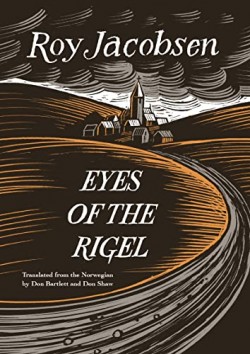 Unseen, The
White Shadow
Eyes of the Rigel
In his Six Memos for the Next Millennium, Italian writer Italo Calvino extolled what he saw as the essential values in the future of literature. The essays cover Quickness, Exactitude, Visibility, Multiplicity, and--most relevant to the final novel in Roy Jacobson's Barrøy Chronicles--Lightness. In his first essay, Calvino relates the story of Perseus and Medusa, noting, on the one hand, Perseus' literal lightness by way of winged footwear, and on the other, his fate to lug with him everywhere the burden of the stone-making Gorgon head.
"Whenever humanity seems condemned to heaviness," Calvino writes, "I think I should fly like Perseus into a different space. I don't mean into dreams or into the irrational. I mean that I have to change my approach, look at the world from a different perspective, with a different logic and with fresh methods of cognition and verification. The images of lightness that I seek should not fade away like dreams dissolved by the realities of present and future..."
At the outset of this third installment of her story, there's a diaphanous ease with which Ingrid Barrøy begins what will turn out to be an arduous journey. Leaving the island of Barrøy was unthinkable in The Unseen, and heart-breaking in The White Shadow, but in Eyes of the Rigel Ingrid simply departs at the end of the chapter and arrives at the main island on the next. As she heads out in search of the shipwrecked Russian POW for whom she cared for and with whom she had her child Kaja, she covers great distances with the sprightliness and suddenness of a fairytale or myth. In these early pages, it's her desire that's important, not her journey, so the journey hardly exists. She rises above her burdens as if by some enchantment. As finely as Jacobsen captured the heavy expanse of time in his depiction of a remote island and remote family that hadn't changed in centuries, here his prose and storytelling is nimble and fleet, as free of the weight of Barrøy as Ingrid is.
It's the summer of 1946 in Norway. Ingrid, carrying a daughter with the exact eyes of the man she seeks, is "following in his tracks, in the summer, which [her Russian] had left in the winter." The war has technically ended, and the German occupation along with it, but a remnant of conflict still lingers in the out-of-the-way villages, farms, and ports. It becomes clear to Ingrid that the end of fighting is not the same as the end of war. Her asking after the fate of her fleeing Russian stirs a barely settled pot. Each and every community, each personal relationship, remains compromised or marred by collaboration or resistance or betrayal during the war. Ingrid's questioning about events and memories of such a recent past largely serves to revivify a past that most would prefer to forget.
In his celebration of those five essential values, Calvino also explores the importance of their opposites. The lightness with which Eyes of the Rigel begins gradually becomes laden, the distance felt more, the weight of Ingrid's child with the Russian growing heavier and heavier. From the outset, the Barrøy Chronicles have been concerned with how this island and its denizens are both a part of and apart from the wider world. Generational isolation and self-sufficiency carry with them their own mix of lightness and heaviness, as does incorporation, and this conflict is broad and alive in this third book.
Go To Literary