REVIEW: LAKE OF THE DEAD 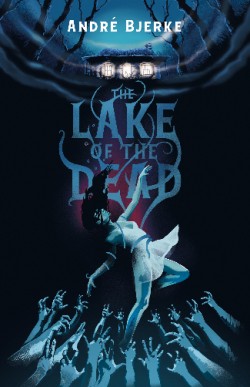 The Lake of the Dead (Valancourt International)
The Valancourt Book of World Horror Stories, volume 1
The Valancourt Book of World Horror Stories, volume 2
The Women of Weird Tales: Stories by Everil Worrell, Eli Colter, Mary Elizabeth Counselman and Greye La Spina (Monster, She Wrote)
The Dead Hours of Night (Monster, She Wrote)
The Bishop of Hell and Other Stories (Monster, She Wrote)
Manfrone; or, The One-Handed Monk (Monster, She Wrote)
When genre announces itself, structures of expectation follow. Most readers rely on this. When we say we’re in the mood for a good mystery or a good romance or a good sad white middle-class man story, we’re acknowledging that we know what we know something of what to expect from a book we haven’t read. As much as we want to be engaged and surprised, we also want to be satisfied. Andrè Bjerke‘s 1942 novel Lake of the Dead, however, is one of those rare page turners that doesn’t reveal what sort of book it is until its conclusion. Is it a murder mystery or a horror? You'll have to wait and see.
Consistently ranked as one of Norway's best crime novels, Bjerke's second book under the name Bernhard Borge, sees its first true translation into English thanks to Valancourt Books. In recent years, Valancourt has been bringing back lost or forgotten or underread essentials in the form of its Paperbacks from Hell series, its Monster, She Wrote series, or, most recently, it's two indispensable volumes of world horror stories, many of which are available for the first time in English. As it exists within Norwegian literature, The Lake of the Dead is something of an outlier and a trendsetter, as the country had no history of horror writing before Bjerke. As the introduction to this translation explains, when Bjerke was tasked with compiling an anthology of Norwegian horror, he had to scrape the bottom of the barrel in such a way that the inclusion of Roald Dahl was justified because the author's parents had been born there.
Lake of the Dead features an erudite, allusive cast consisting of a psychologist intent on tunneling to the molten core of the mind, a lawyer who once tried his hand as a private detective and did little more than spy on the husband’s of jealous wives, a literary critic with “a sublime contempt for everything that smacks of natural science and rationalism,” and a well-regarded author of mysteries—our narrator—whose writer’s block he’s sure will lead to his ruin. During a dinner party one night, as our narrator bemoans his dry spell, his friends suggest a plot inspired by the experience of their friend Bjorn Werner, who has just purchased a haunted cabin in the woods.
The lore of the cabin details a wealthy weirdo named Thor Gruvik. So besotted was Gurvik with his own sister that, when she runs away with one of her brother's servants, he hunts the lovers down, dismembers them, and then throws himself along with their remains, into the lake. Superstition has it that any person who stays in the cabin takes on the spirit of Gruvik and will inevitably sink themself into that same lake. Upon hearing this chilling tale, our narrator is sure it's just the thing to rescue him from his block. A few weeks later, Bjorn gets the scoop on him when he goes missing under mysterious circumstances at the cabin.
Not willing to take their friend's disappearance, the group travel to the cabin together. As they begin to experience for themselves a strange force in the place, debate rages over whether they are being manipulated by powerful forces of nature without or equally as mysterious forces of the psyche within.
As a book of horror, The Lake of the Dead is creepy and classic. Eldritch sensations, bumps in the night, menaces caught just in the periphery. As a book of ratiocination, it will call to mind the golden age mysteries of Christie, with aloof and brilliant detective overseeing events that has everyone else scratching their heads. But before you discover which genre you've been reading all this time, the Norwegian stalwart will satisfy both sets of generic expectations. The Lake of the Dead is a classic for a reason.
Go To Page Turners & Pot Boilers