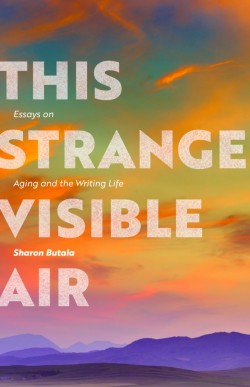 This Strange Visible Air: Essays on Aging and the Writing Life

Sharon Butala wonders if loneliness is a yearning for what we have lost. Well, you can’t argue with the fact that it most certainly has lived in this strange visible air that we have been breathing for the last two years. But she also believes that if you can have an honest dialogue with yourself, isolation will not be as severe.

This Strange Visible Air: Essays on Aging and the Writing Life is probably the most revealing and intimate memoir that I have ever read. Butala unwraps potent self criticisms and in doing so forges a relationship with me and you, her readers.

Although Butala has always had a need for solitude she was driven to the writing life very early. When young she admits that her journals were banal and narcissistic and that only her dreams were interesting. This is probably something many of us could relate to.

But unlike many of us she stuck herself to the writing post and in doing so allowed herself to get tangled up in the aspiration, the obsessions, and for her, in retrospect, the delusion of heightened consciousness. She wanted to be respected as an intellectual and unabashedly acknowledges that in her desire for fame and respect, she was often disappointed when she didn’t get an award for which she was nominated or when she compared herself to those writers placed in the pantheon.

The subtitle of the book is Essays on Aging and the Writing Life and for her aging and writing went hand in hand. She is now 80 and reminisces about almost breaking through the “mid-list” writers’ niche with her book Perfection of the Morning. Just at that moment large corporate entities bought up and conglomerated and whacked the creative life out of publishing – for a while anyway. This section of the book rings so true for myself – a bookseller for 50 years. So many changes, not all of them good.

It's not an easy time to be a writer. It’s not always easy to get older, especially for women. Butala thinks that the hardest lesson to learn growing old is that you are not special. But I would argue that she is unusual in her goal to say it as it lays. And for her, “if lucky, you will get old gradually with your body wearing out bit by bit and the soul thinning, loosening from it’s anchor.”

While reading this book I had a couple of dreams of women who were important to me and whom I hadn’t talked to in quite a while. In the dreams they were both unhappy. I materialized Butala's belief in the importance of female friendship and made over the phone contact. Luckily, they were ok and we had lively and warm conversations.

Thank you Sharon Butala, your life experience, by virtue of the fact that you can write and get published, is valuable!