REVIEW: A HERO OF OUR TIME 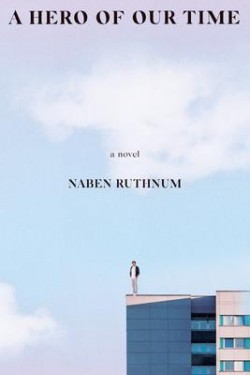 A Hero of Our Time: A Novel
Find You in the Dark
Important conversations are important, but they're tricky to get off the ground. Ideas can be honed to a glinting degree of unassailability, but the turds that most people are, unfortunately, can only get polished so much. We are a mess of contradictions and inelegances, cramjamed with inherited and fostered prejudices, and we can't help but smear our muck over every nice thing we handle.
Naben Ruthnum's new novel, the first under his own name, is messy like a person. It's as brilliant as it is petty and sharp as it slovenly. But its messiness is an artful triumph. A Hero of Our Time is narrated, and--a rare thing for first person narratives--written by Osman Shah. Osman, whose self-loathing results in some of the finest pearls of prose, works for AAP, a tech company driven to revolutionize education. Osman represents a ticked box in a world obsessed with the appearance of diversity. He knows it and he uses it to his advantage. "Certain stories," he opens his own story, "are for wielding, not telling."
His go-to story concerns an incident of racial profiling at the airport. "More of a joke, a few lines of generic airport experience and television borrowings honed into a minor weapon for use in business situations." Properly wielded, the story is meant to make its largely white audience aware racial difference and all the attendant inequality, while at the same time breaking the rime of racial tension. "Anyone," Osman observes, "who takes pleasure in rendering even brief power from goodwill and fear is shit. When I used this story, I was no exception." The story is by-and-large innocuous until it's appropriated by a colleague and the novel's apparent villain, Olivia Robinson. In telling the story, and letting it fall into the hands of Olivia, Osman unwittingly assists his villain-to-be's takeover of the company.
Once sterling notions of diversity and equality are exploited and weaponized in A Hero of Our Time, any inherent goodness in the concepts exhausted and perverted. The book resists easy assessment, because it resists easy stances. As much as it presents an easy criticism of white exploitation, it also grapples with the idea appropriating ones own culture for the purposes of scaling white power structures. Each character--at least as they're presented by the author, Osman--operates behind ever-changing facades that are never exactly real or fake.
There is something for everyone in this novel. Each reader will recognize the shortcomings of others and hopefully spot and dwell on their own in the always-complicated, always-embarassing groping at the ideals of good and right and just. Ruthnum is scathing and he's allowed to be because he never misses. For a book about falsities and facades, A Hero of Our Time is so excitingly true.
Go To Page Turners & Pot Boilers