RT @mmmbarclay: Guelph! You and I have some history. Let's make some more. This launch is tonight @Bookshelfnews 630 doors, 7pm eve… t.co/4LLSs2Qo6U

REVIEW: THE MAKING OF A MUSEUM 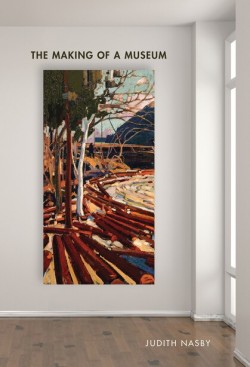 The Making of a Museum

Some of you may not have visited the inside of The Art Gallery of Guelph (AGG). But because of Judith Nasby’s vision, I am quite certain that you have experienced The Canadian Begging Bear. This striking sculpture which stands on Gordon Street, just outside the gallery, usually has several creative costume-changes a month and if you are like me, you smile every time you pass it. Pleasure to passersby is what artist Carl Skelton had in mind as he gave his permission to have the bear festooned as its fans saw fit.

The Sculpture Garden, which is home to The Begging Bear and other installations has been years in the making and is a superb example of the importance of public art.

Judith was the Director and Curator of the gallery for 45 years and The Making of a Museum is an assemblage of her recollections. Her memories are infused with humour and great affection for all involved in the evolution of a collection that began on the non-descript walls of Creelman Hall and ended up in a delightful, light filled gallery designed by Raymond Moriyama.

The road to the Art Gallery of Guelph required byzantine negotiations with the Upper Grand District School Board, the City of Guelph, the County of Wellington and The University of Guelph. I get tired just thinking of all the necessary bureaucratic meetings. Luckily Judith has kept these details to a minimum.

She has however brought to life some of the many important supporters and patrons who believed in the importance of art. What began as the Ontario Agricultural College is now a prestigious university with a renowned art gallery. Many of these early professors insisted that “aggie” students be exposed to art and music. Ah, the wisdom of the past…

The past allowed Judith and her team to do what would never be sanctioned now. Once, back in the 70’s Judith was able to curate a collection of up-and-coming New York photographers, now very famous. She thought that the university would buy the collection, but when they didn’t, she and her husband had to drive the photos back to New York in their rented stationwagon. The only place they could find to park overnight was in some dark underground lot. They backed into the space and crossed their fingers that the photos would be there in the morning. Those photos are now worth hundreds of thousands.

Other escapades like cigarette girls at Guelph Spring Festival openings and grants from cigarette companies give colour to the times and make you realize how much has changed, for the better in this case.

Judith and her team decided early on to distinguish themselves by concentrating their collection on contemporary Canadian and Indigenous art. This is how canny she was. She didn’t need the Truth and Reconciliation Commission to tell her how important Indigenous art is. She understood this on a visceral level.

This would make a perfect gift for anyone interested in art, local history, entrepreneurship and grit! There are great plates in the book, but gosh darn, just go and visit the gallery. You won’t be sorry. And thanks to Judith and her team for never giving up on their vision.