RT @jeanmillswriter: Took a turn on @LE_Carmichael's blog: When "Research" Means Mining Your Own Experience - which means my time hangin… t.co/m7ulxAGTSr


Introducing “Vines and Spines”. Treat yourself while you buy treats for others! Enjoy some incredible Italian win… t.co/FQVlI59Wqv

REVIEW: POWER OF THE DOG 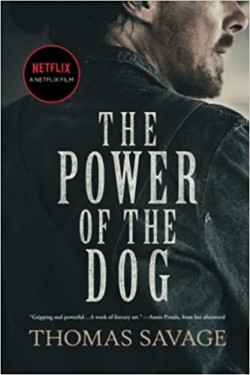 With TikTok being the primary means of inspiring interest in the backlist lately, it's heartening to see something as old fashioned as a new film from Jane Campion--her first since 2009--being responsible for the revivification of an old chestnut.
Published in 1967, it's a wonder that Thomas Savage's The Power of the Dog hasn't persisted alongside the thoughtful western novels of McMurtry, Portis, or Swarthout. Funnily enough, most of what we now consider to be the classics of the genre were buoyed by contemporary film adaptations. McMurty was helped along by Paul Newman in the adaptation of his first novel and further shored up by the success of the Last Picture Show. Both Portis and Swarthout have John Wayne to thank for the cementing of both True Grit and The Shootist into the canon.
Set on a Montana cattle ranch during the 1920s,The Power of the Dog finds brothers Phil and George Burbank carrying on the family business. Phil, the oldest, is hard working and rancorous and is devoted to the life of a cowpuncher. Phil doesn't wear work gloves and refuses to bathe in the house. Phil's younger brother George--whom he calls Fatso--is more aloof and inelegant. The two share a bedroom in an otherwise empty grand ranch house. For all his outward enmity, Phil cares for George the way one does an animal unable to make it on their own. When George marries Rose Gordon. a widow who runs the hotel in Beech, the railtown where the Burbanks ship their cattle, the betrayal infuriates Phil. He's convinced the woman is only after the family money and there's something about Rose's son Peter, a sensitive and intelligent boy, that roils a special distaste in him.
The Power of the Dog is a creeping, expansive novel. Like the ranch house itself, the drama of the few people involved can feel extra tense, surrounded as it is by the hulking Montana hills. Phil's active cruelty tugs against George's stubborn blitheness, and, being caught in the middle, Rose--whose first husband died from suicide after being shamed by men like Phil--suffers the most of the three. Phil's campaign against Rose becomes complicated when her son arrives at the ranch for the summer. Peter is not dense like his step-father or delicate like his mother and he's certainly not intimidated by Phil.
The novel's resolution, like Peter, is in no rush. That languid pace creates a tension that builds like storm clouds of the ranch, casting great shadows and turning the light eerie. If it requires an adaptation to secure The Power of the Dog's place amongst its peers, Jane Campion is an ideal filmmaker to elevate the novel.
Go To Reviews