Introducing “Vines and Spines”. Treat yourself while you buy treats for others! Enjoy some incredible Italian win… t.co/FQVlI59Wqv


Jane Campion's "The Power of the Dog" ( @TPOTD), opening this Wednesday, should at last secure Thomas Savage's 1967… t.co/rloDFaU8He


Stellan Skarsgård has lately had some great insights into the ecosystem of modern film. Check out an insightful two… t.co/QXiag5wB7K

REVIEW: THE WRITER'S CRUSADE: KURT VONNEGUT AND THE MAN LIVES OF "SLAUGHTER-HOUSE FIVE" 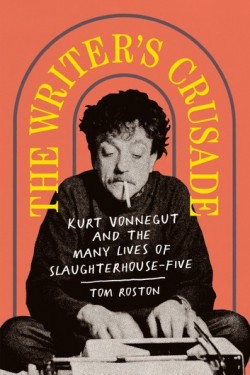 In Slaughterhouse-Five, WWII veteran and optometrist Billy Pilgram is abducted by aliens from the planet Tralfamadore. Along with sticking him in a zoo, the Tralfamadorians, shaped like plungers, share their perception of time with Billy. They see all of time, all of life happening at once. While a person might be dead in one instant, it doesn't matter much, as they remain alive in an earlier instant. Bill's experience with plunger creatures leaves him unstuck from time.
In his own way, Vonnegut had a similar effect on the readers of Slaughterhouse-Five. While maybe he wasn't sending readers flashing back and forward in their lives, he unstuck many from hardened notions of what war was, what death was, what high and low literature was, and what the novel in general was. Vonnegut, who died after tripping over his little toy dog's leash in 2007--so it goes--is one of those few before and after humans. Whether you care for him or not, there's no arguing that things were never the same after him.
For all his impact, though, it's surprising that we haven't seen more Vonnegut-related bits and bobs since his death. Much of the posthumus output has been represented by Vonnegut's unpublished material and 2011 saw a rather gloomy portrait of the author with the biography And So It Goes. For anyone who's also noticed the lack of Vonnegut in this past decade where we seem to need Vonnegut the most, November 2021 looks to be a good month.
A lifetime in the making, this week the cinema is showing Robert B. Weide's documentary Kurt Vonnegut: Unstuck in Time. Begun thirty years ago, the film promises to show a more intimate side to an author who became so known for including himself in his books. For a more precise look at Vonnegut's landmark book, journalist Tom Roston tackles the past, present, and future of Slaughterhouse-Five.
Barely twenty, the young Vonnegut survived the bombing of Dresden. For the whole of his career until 1969, he had attempted to write his war novel. He'd been there to see everything, so how hard could it be? Roston begins his look into Slaughterhouse-Five by searching out the many drafts of the book that would become the author's epochal best. Turns out that unsticking a whole generation doesn't work on the first attempt, and what glimpse Roston gives of Vonnegut's struggle will certainly be a balm to any writer currently grappling with a work in progress. The many drafts reveal the evolving meaning that Vonnegut was able to parse from his experience in Dresden. And the drafts, along with many interviews with those close to Vonnegut, reveal that Vonnegut, so famously certain of the world and his place in it, was not always so firm. Roston even uncovers the possibility that Vonnegut and his wartime buddy Bernard O'Hare tracked down and murdered one of their particularly cruel former Nazi guards.
Much of The Writer's Crusade considers the role that PTSD played both in the creation and the execution of Slaughterhouse-Five. Throughout his life, Vonnegut gave conflicting statements regarding how deeply the war affected him. While it's ultimately unclear whether or not the author used fiction as a means of processing his war trauma, what's certain is the importance of the novel for generations of soldiers whose traumas are much less ambiguous.
Some of Roston's investigations into trauma and the did Vonnegut or didn't Vonnegut have it may be a bit of digression for those readers who were merely impacted culturally by the novel. In speaking with the people for whom the novel was psychologically revolutionary, though, Roston exposes an often unspoken of importance of Slaughterhouse-Five. With each chapter, the group that surrounds the wampeter of the novel grows wider and wider. In the ends, it's a marvel that such an odd, specific book had and continues to have such a wide, varied reach.