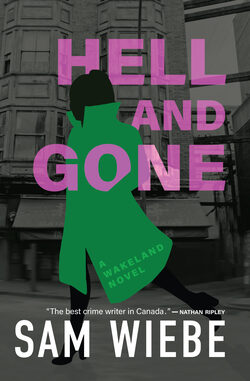 REVIEW: CUT YOU DOWN
Hell and Gone: A Wakeland Novel
The greatest nemesis for any literary sleuth may be their readership.
Fans want to see their favourite recurring ratiocinators tested, want them to be presented with a more snarled knot than the last one they were left to pick at, want them to take a licking and keep on ticking. As soon as they're out of one bind, readers want them in another. And fans expect, sometimes demand, that their hero snap back into taut shape after being stretched near breaking. At the same time, though, they want their sleuths to be realistic, human, and fallible.
Check any Raymond Chandler paperback and you'll likely find a blurb from The New Yorker gushing that Chandler "wrote as if pain hurt and life mattered.” It's a great-sounding quote, and certainly true of Chandler. But as much as it praises the venerable author, it points out in its needing to be said at all that, for many practitioners of the genre, pain is rarely painful and human life is often trifling. One has to wonder, as your favourite do-gooder returns book after book, how can they stand pain hurting and life mattering so much?
Over two books, Dave Wakeland has become my favourite PI. Doesn't hurt that he's Canadian, operating in a very loving and critically presented Vancouver. Wakeland drinks tea and listens to Nick Cave and needs sleep to function as much as anyone else. But perhaps my favourite feature of Wakeland is that, while he stretches himself as each pickle demands, his elastic comes out a bit more slack and wobbly every time. Each case, the successes as much as the failures, take their toll. Pain certainly hurts--and it's refreshing to see a human character struggle against the physical and psychological knocks of the job and genre--but, more importantly in the books of Sam Wiebe, life matters. Really, things might be easier for Dave Wakeland if life mattered a little less.
"Fireworks let off indoors." Hell and Gone, Wiebe's new book, doesn't waste any time dumping its hero back into the fray. Wakeland's spent the day and most of the night on the road, shaking down a scaffolder owing back childcare. Instead of going home and disturbing his partner, he crashes at his office to do paperwork. He's zoning out, maybe nodding off, when the crackling startles him. Peeking out his window, the morning street looks normal, though a man usually set up to sell calendars is not where he should be. Wakeland spots him on the other side of the street, his cart tipped and his wares spilled. Then he hears another round of fireworks. From there, everything goes to hell.
Masked gunmen emerge from the building across the street and open fire on the pedestrians. Wakeland, a few floors up, literally jumps into action. He helps an older woman who's bleeding out, unable to do anything for the woman's daughter, dead nearby.
A few books back, perhaps Wakeland would be all over the shooting. He's one who doesn't leave well enough alone, often to his own detriment. Like every good PI, Wakeland dances on the toes of the police, but this time when they come looking to him for help, he wants nothing to do with it.  With this act of stunning, violence, he knows it's not something he wants in on. He realizes immediately, as he says later in the book when, of course, he's drawn into the case, "There's no out. 'Cept further in."
Like any good shamus worth as many sequels as the author can and is allowed to produce, Wakeland sticks to a moral code. And that moral code, from sequel to sequel, is a real bruiser--especially in Vancouver. More broadly, Wakeland is a proponent of social justice. No case exists outside of the snarl of colonialism and corruption, and what comparatively small wrongs Wakeland is able to right seem so middling and miniscule within the larger picture. "The lies are catching up to us," Wakeland lays out in Hell and Gone. "A city founded on racism and land theft, that lets people die on the street and pretends it never happened. No matter how much yoga wear we sell, how many killer whale statues we put up. We're not separate from the history of the West. Vancouver is just where the west ends."
Wiebe delivers a humdinger with Hell and Gone. For genre fans there's heists and biker gangs and corruption within any and all reputable institutions. What ranks Wiebe at the top of his game, though, is his awareness that all this gritty, exciting, page turning fare thrives under the belief that some lives matter more than others. For both Wiebe and Wakeland there's an almost quixotic sense that any good they do pales in comparison to all the established bad in the world, but goddamn if both their trying isn't compelling stuff.
Finishing Hell and Gone, you'll likely want Wakeland to take a little time out for himself. At the same time, you'll no doubt be hunting for when the next book's due.
Go To Page Turners & Pot Boilers