RT @mmmbarclay: Guelph! You and I have some history. Let's make some more. This launch is tonight @Bookshelfnews 630 doors, 7pm eve… t.co/4LLSs2Qo6U 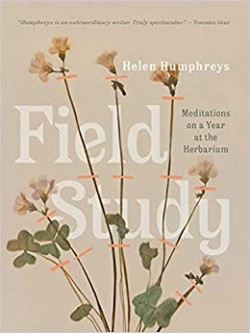 Field Study: Meditations on a Year at the Herbarium

How can reading a book about dead plants bring so much pleasure? Accompany Helen Humphries as she spends a year wandering through The Fowler Herbarium’s 140,000 dried plant species and this question may be answered.

By the way, a herbarium is not a place for raising herbs but a resting place for dried plants.

Field Study is a fascinating rendering of both the era and the individual, who, armed with just a pencil, a magnifying glass and a specimen bag spent literally years foraging for species after species. It was like the premiere self-improvement exercise of the late 1800’s – so popular that it almost drove the lady slipper into extinction.

These mostly amateur naturalists had what could be described as their own Facebook group, mailing specimens back and forth, discussing different species, collaborating and congratulating. What fun!

There are so many sociological issues revealed. One point that Helen makes over and over is the delight and pride of the collector. These amateurs were respected as if they were professionals. It was also a space where women came out of the domestic sphere and explored and contributed almost as much as men. Although she does note that women tended to collect seashore specimens as perhaps wandering around alone in the forest may have been too threatening for women at that time.

So many fascinating botanists! Cyrus Prince operated a hospital for damaged bulbs. He was a quaker who refused to fight in the civil war and instead contributed over 500,000 species to North American herbarias. And then there is the case of Marcus E. Jones. He was a loner and a homeless man with only a handcart who made his meagre living selling specimens to educated collectors who trusted him.

Along the way you learn so much about plants. Did you know that blue is the colour least found in nature but the colour that remains most itself after death? Beautiful white puff balls end up like brown mush and grasses tend to retain their original colour and vitality while most highly coloured flowers end up a shadow of their former selves.

The last and perhaps most important element of Field Study is the author herself. Helen has made herself a character in her book. She tells us how difficult her life has been recently because of the death of more than one person close to her. Her beloved dog Charlotte dies during the year. This is devastating for her. Her very authentic and lyrical prose makes this beautifully illustrated book one to collect and read and read again.