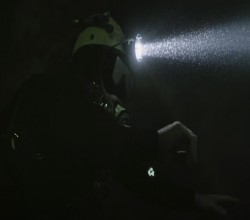 We continue with the tradition of bringing films from the Toronto Int'l Film Fest (TIFF), to Guelph audiences as soon as they become available. This week we feature two films from last month's festival.

The Rescue won the prize for Best Documentary at this year's fest and as their last film (Free Solo) proved, Jimmy Chin and Elizabeth Chai Vasarhelyi can make a film based on real events (where we know the final outcome) feel like a nail-biting, sweat-inducing thriller. And with The Rescue, these award-winning filmmakers continue to thrill and engage audiences with tales of intense human drama.

Mia Hansen-Love makes the most of her highly talented cast featuring, Tim Roth and Vicky Krieps (Phantom Thread) in a tale of two filmmakers visiting the island where Ingmar Bergman made many of his most famous films. Tony (Tim Roth) immediately feels at home and finds a fawning audience for his work, while Chris (Ms Krieps) struggles to find her voice through the surrounding reverence for the island's revered patriarch and Tony's aloof detachment. They may not be toppling the statue of some old icon, but Chris and director Mia Hansen-Love have a great time bringing Chris's story to life as a film within the film (starring Mia Wasikowska in an award-worthy performance) while poking fun at Bergman's paternalistic legacy. Great stuff!

Two highly recommended films from international festival fame, in your own backyard. I hope that you can make the time to join us for some great cinema. - ph