REVIEW: THE HAUNTING OF ALMA FIELDING 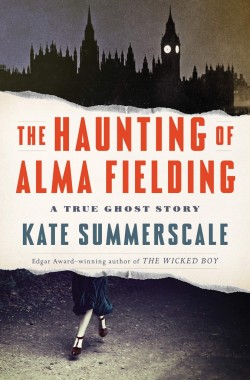 The Haunting of Alma Fielding: A True Ghost Story

James Wan's The Conjuring, based on the adventures of real-life paranormal investigators Ed and Lorraine Warren, has sprouted as many reaching tendrils as a sweet potato forgotten in a pantry. Eight films into the Conjuring-verse and the true aspects of the story have been so far refined and sensationalized as to void any claims of reality. A shame, as grist for Wan's mill actually seems interesting.

Kate Summerscale's The Haunting of Kate Fielding offers a look at what a sober telling of a paranormal investigator might look like. Nandor Fodor is a Hungarian ghost hunter working for the International Institute for Psychical Research. In his line of work, he'd been accused of being "cynical about the supernatural and unkind to mediums." In 1938, he's sent a recent newspaper clipping describing a poltergeist attack in a suburb just south of London. The article appears "next to a giant cut-out photograph of Adolf Hitler, who was poised to invade Austria, so that the news of the haunting seemed to issue from the Fuhrer's shouting mouth."

The subject of the article, the subject of the haunting, is Alma Fielding, a thirty-four-year-old woman living with her husband, their son, and a boarder. A bout of pelvic pain possibly connected to previous kidney issues knocks her out quite suddenly. Bedridden, Alma passes days under the influence of fever and medication, at one point spotting a six-digit handprint on the mirror above the bedroom fireplace. A week later, Alma and her husband Les are awoken by the sound of something shattering. The spring from bed only to duck another glass flying across the room. The house went to hell, with face cream and coins made air born by an unseen thrower. After an hour, things called down. In the morning, Alma was feeling well enough to prepare breakfast. In the kitchen, an egg smashed and saucer snapped. Instead of calling the police--for what could the police do about a haunting?--she called the Sunday Pictorial. A similar havoc was wrecked for the benefit of the newspaper men as well.

Finding himself in the midst of a professional crisis, Fodor figures Alma's haunting is ripe for validating both his shrewd methods, lately criticized by both skeptics and believers, as well as the reality of the paranormal itself.

A far cry from the befuddlingly bad ghost hunting shows of today, Fodor was, in his time, one of the last swatches left to be cut from the original cloth of William James. Considered the father of American psychology, James was also a founding member of the American Society for Psychical Research. Not quite Ghost Busters, James and his ilk saw value to the experience and reportage of supernatural phenomena. Along with their burgeoning notions of psychology, the Society wondered whether the source of strange happenings could from within as well without. It's with a similar will to believe and want to understand that Fodor begins his relationship with Alma.

Alongside her rich telling of Fodor's investigation, Summerscale captures the undercurrent of dread in an England on the precipice of war. She presents a culture still scarred from the horrors of the First World War, bracing themselves for another round of terror. Fans of classic spoopy stuff are sure to get a kick out of the depicted haunting and inexplicable manifestations, all taken from Fodor's notes and all worthy of a welldone big or small screen treatment, but those looking for something deeper will find here a unique lens through which to view the effects of trauma, both personal and national.

By turns fascinating and troubling, there's nothing salacious or exploitational about The Haunting of Alma Fielding. Instead, it becomes a genuine consideration of our limitations when it comes to finding order and reason in some of the more baffling, harsh aspects of life.