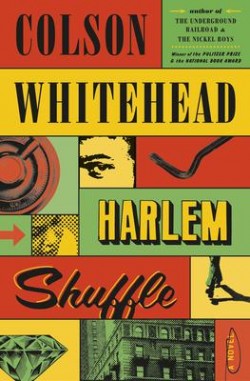 Harlem Shuffle: A Novel
Ray Carney is an upwardly mobile businessman endeavoring to make fine furniture (one of the many still segregated aspects of American culture in the late-50s) available to Harlem residents. He's also been known to sell, from time to time, electronics of dubious origin. His furniture store is a fence, a boundary line between the straight world and the bent one. Carney himself is
"only slightly bent when it [comes] to being crooked."
Looking to keep his upward mobility mobile, though, Carney does his best to stay straight. He wants a better life for him and his growing family. A bigger apartment, more influence with politics and the community. When his cousin Freddie offers him as a fence following a robbery of the Hotel Theresa--the Waldorf of Harlem--Carney finds himself in the middle of a world he was happy to stay on the perimeter of.
Over the five years that span Colson Whitehead's Harlem Shuffle, Carney struggles to balance on his fence. The deeper he gets the more he splits, adopting a "dorvay" lifestyle--a daytime self and a nighttime self separated by four hours sleep. But his two selves can only stay cloven so long. "He'd spent so much time trying to keep one half of himself separate from the other half, and now they were set to collide. But then--they already shared an office, didn't they? He'd been running a con on himself."
Harlem Shuffle is full of generic delights, underworld swagger, and period richness. Whitehead's past two novels were Pulitzer winners and his new one is no less deserving. The five-year scope of the book is concise, but it also sprawls far out behind and beyond its time frame into the history before and after this pivot period of American history.
Go To Page Turners & Pot Boilers