REVIEW: SOMETHING NEW UNDER 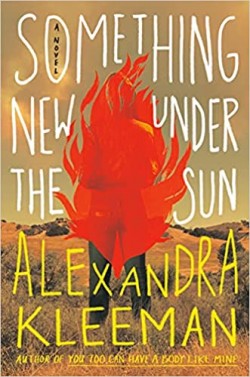 Something New Under the Sun: A Novel
When his first novel is optioned for a film, east coast novelist Patrick Hamlin leaves his wife and daughter behind to go west. Hoping to exert some manner of influence on the adaptation of his only successful book, he finds he signed away all his rights in exchange for a job as a PA on the production. Instead of driving the film, he ends up driving the film's lead: the grown child star Cassidy Carter who, if you believe all the tabloids and viral videos, has gone totally doolally. LA traffic has always been a bear, but the constant and encroaching fires makes it an unbearable, inevitable force of nature in Alexandra Kleeman's Something New Under the Sun.
A fish out of water (or, since there is no longer any natural water in California, the nation being slaked instead by a synthetic marvel, a fish out of WAT-R), at first Patrick finds the constant fires odd. But, overtime, he becomes used to them. Waylaid by one such conflagration, finding his mind wandering to Cassidy's nose--a nose so perfect that droves of fans have gotten rhinoplasty in order to have it for themselves--he thinks to himself, "It's not really an emergency... if you can drive around it."
"An emergency," he thinks, "would be everywhere, inescapable; some long-submerged animal intelligence would recognize it with fierce instinct. In an emergency, the mind would not drift aimlessly from daydream to distraction... in search of something to grasp."
I can't think of a better expression of western impotence--and Kleeman's book is chockablock with such succient observatiosn. In over a year of dogpiled disaster, we still see devastation as an obstacle to drive around rather than stop for. As Patrick, with the help of Cassidy (who once played a detective on TV) strives to get to the bottom of why no one seems concerned whether or not the film is getting made, and how that might be connected to the insidious  ubiquity WAT-R, his struggle becomes not so much about getting to the bottom anything, but to continue seeing the depth of the natural world and not its simulation.
In her second novel, Kleeman has presented the dissociation and simulation of our current moment in time with the mordant acuity of DeLillo and Pynchon. She at once captures the daily strangeness and natural depravity to which we've become so inured and elevates and twists it enough to help us re-see the devastating absurdity around us. Not only does Something New Under the Sun hit the nail so deftly and swiftly on the head, but it delivers such a sure blow that it leaves a perfect pucker of its hammerhead in the soft wood of our reality.
Go To Literary