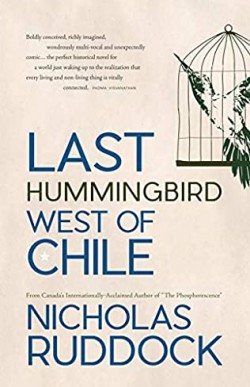 Guelph doctor, poet and novelist Nicholas Ruddock must have had a rollicking good time writing his new novel. Not only is this period piece filled with Bridgertonian characters like Catherine Amberley, Andrew Amberley and Gerald Egerton, but the hero is a hummingbird named Zephyrax, and supporting actors… Well, let’s just say they are rock, paper, sky, scissors.

Everyone and everything has its own point of view, filled with aches, pains and longings. Sounds entirely weird right?  But wait, you haven’t experienced Nicholas’ burgeoning imagination, coupled with his wide range of knowledge and his lyrical understanding of flow in language.

Really, it’s a wonder to behold.

The evil Earl has two living children for whom he has no feelings. The maids in waiting are intelligent and entwined sexually now and then. The twin children of the Earl are their father’s opposite. The maids plot to kill the Earl but mistakenly kill the friar. As primogeniture reigns, the male child, Andrew, who hates his father, renounces his rights and flees the land.

Of course, while he is away his sister marries the dastardly Gerald who salivates for the time when he will inherit the estate. Catherine, wife of Gerald and sister of Andrew, misses her beloved twin. As time proceeds, her eyes are open to the profligacy of her husband. He’s a real creep.

Through a series of mishaps, Andrew—like Odysseus—has innumerable adventures around the world but finally returns. He’s a nice guy.

The hero is Zephyrax the Hummingbird who, always the skeptic, is the voice of reason throughout. Is Nicholas channelling himself through Zeph? Other individuals are Quercus Alba 251 (white oak and years lived), the reef 500,000, the island 12,000, Fetu 8 the boar, and a whole lot more. This cacophony is constantly screaming white European man, you have really screwed things up!!!

Virtually all of the women in this cautionary tale are woke. The men who strut the story seem to prefer “annihilation to compromise.” What should do we do with a cautionary tale? For sure, read it and then adjust our lives accordingly.