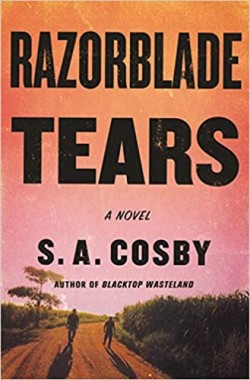 REVIEW: BLACKTOP WASTELAND
Razorblade Tears: A Novel
Blacktop Wasteland: A Novel
I'm not sure SA Cosby believes in anything so simple as heroes and villains.
The lead of last year's breakout Blacktop Wasteland, retired getaway driver Beauregard "Bug" Montange, was both pro- and antagonist of that book. For Bug, struggling to free himself from familial and prejudicial cycles of poverty, doing the wrong thing himself came to be the only way to keep right things an option for his son. In Cosby's follow-up, Razorblade Tears, there's a similar no-win situation as grieving fathers seek revenge for the murder of their sons. Complicating the moral cleanliness of their mission, however, is the fact that both men, Ike and Buddy Lee, in one way or another, disowned their sons for being gay. In some ways, they are as implicated in their sons' deaths as the killers themselves. Add to this Ike's brutally criminal past and Buddy Lee's knee jerk racism, and, in any other book, these two would be the villains.
Blacktop Wasteland had reviewers everywhere scrambling for driving metaphors. Given the legs that major label debut grew, "high-octane" and "breakneck" praise abounded. The swirling smoke of all that burnt rubber had a way, unfortunately, of obscuring the real heart of the book. While Cosby is adept at the most thrilling and frenetic qualities of the genre, his real interest is in the hearts and souls of his characters, in the maintenance of what's good and what's right in the baldest face of the opposites. While Razorblade Tears certainly isn't lacking bruising, brtual action--and a twist so tight it looks like a straight line--the human complications are on full, undeniable display.
While he may not be interested in any concept so simple and flat as heroism, Cosby is a virulent believer in redemption. No person, no matter how defiled by choice or circumstance, is unforgiveable or unsavable. And Cosby has no interest in making the journey back into the black easy one. In fact, between his two recent novels, it would seem that total sacrifice of self is what's required for real contrition. Getting his characters both to this realization and then over that final, harrowing hump towards fulfillment makes him a stand-out in the mystery or thriller genre--and just about any other genre for that matter.
Go To Page Turners & Pot Boilers