The Bookshop Podcast based in the USA and Australia reached out to .@StephMinett to chat about The Bookshelf. A nic… t.co/1Qsy7Qhzdi


@fosterquips Yes we can! What were you looking for? 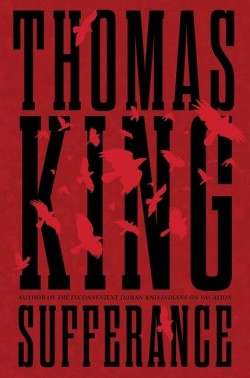 Sufferance: A Novel
If you're consistent and committed enough, you can stop time. Or, rather, you can create the illusion that time's stopped. If not for the weather and the news, one day could easily be mistaken for the last or the next.
Every day, Jeremiah Camp eats the same paltry but supportive meal for breakfast. Then he takes a walk through Gleaming, the region of his youth to which he's returned later in life, inhabiting the former residential school. Along the way, he meets the same people, has different versions of the same conversation, pops into the same shops. In the Piggy cafe, Florence Holder updates him on the "news, blues, and comfortable shoes." "I don't need anyone to tell me what is happening in the world," Camp tells us, "and I don't want to know."
If Camp hadn't taken a sort of vow of silence, perhaps he could tell Florence himself that he's not interested in the news report.
Back at the school, he eats the same spartan lunch as he did the day before, then moves on into the graveyard connected to the school. There, he carries on his slow project of yanking out the anonymous white crosses which mark the graves of the children who died while at the school and replacing them with stones from the Cradle River. Onto these stones he chisels the identities that no one bothered to put onto the crosses the first time around. For dinner, the same as the night before--if there's still leftovers.
There's a comfort and safety to routine. Community and tradition are, to a certain degree, extensions of this. Repetition can be a means of revivifying and remembering the foundational aspects of life that exist outside of time. But, as Camp is reminded by Bob Loomis, the mayor of Gleaming who's eager for progress and increasingly less subtle in his attempts to undermine Cradle River First Nations in the name of that progress, "You can't stop the future."
The future comes for Jeremiah Camp in the form of the past. In his life between growing up in Cradle River and returning, Camp worked for now-deceased billionaire Thomas Locken, gleaning patterns in the world and making predictions. His acumen and accuracy earned him the nickname The Forecaster. In his work, he presumably saw too much and said too much, so that now, in his retirement, Camp says nothing and sees as little as he possibly can. But when the world's billionaires begin dying under mysterious circumstances, Locken's daughter seeks out Camp and his foresight.
Sufferance, Thomas King's new novel after last year's GG-nominated Indians on Vacation, achieves a fine balance between a taut and patient tone. By turns, the book is deeply friendly and deeply suspicious. In his retirement, and with all he's seen, Jeremiah Camp is unhurried, and the novel takes its pace from its narrator. As those around him tug him in one dire direction or another, Camp stays as steady as he pleases or is able, giving room for the book to be as pleasant or grouchy or meditative as it requires.
Because the novel doesn't feature Camp's spoken voice (just his narrative one), room is made for a full community's worth of voices. There are vibrant echoes of King's Dead Dog Cafe program, which aired on CBC from 1998 until 2001. There's even mention of the show slipped in, as one character remembers, "Wasn't there a radio show that gave away authentic Indian names?" "There was," answers another, "but CBC cancelled it."
How does one contribute to a future that's cognizant and respectful of the past without becoming mired in the problems of the present? King doesn't present any easy answers in Sufferance, but between Gleaming, Cradle River, and whatever locale Locken commanders, he starts up a hell of a conversation. A hell of a conversation that's overseen, as it happens, by a man who doesn't talk.
Go To Reviews