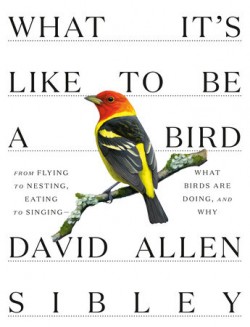 What It's Like to Be a Bird: What Birds Are Doing, and Why--from Flying to Nesting, Eating to Singing

Birding seems to be in David’s DNA. His father was an ornithogist at Yale University. At the age of seven he started diligently drawing all the birds he saw and obsessively catalogued them for future research. During his youth he met the king, Roger Tory Peterson who probably unwittingly, passed the master birder torch on to him.

David has recently said that this book, What It's Like To Be A Bird, is the result of channelling his 10-year-old self by drawing the coolest things birds do.

And they definitely do cool and unbelievable things. Here are just a few.

- Down from ducks and is the most efficient insulation known.

- Barn owls can catch a mouse in the pitch dark, guided by their hearing.

- Crows can solve problems that demonstrate an understanding equal to a five year old.

- Murres can dive 600 feet. No one knows how they survive the pressure at that depth or what they eat.

- A peregrine falcon has been clocked at 242 mph, the fastest time on earth by a living creature.

- A popular simile when describing someone who doesn’t eat much is to say that they eat like a bird. If this were true that would imply a human would eat more than 25 large pizzas a day.

- A single chickadee can store up to a thousand seeds a day and remember where they are.

And there is so much more.

The introduction to the book is organized under different principles like sight, sound, feathers, movement, food and foraging. It’s full of fascinating minutiae about these wild creatures. Sibley has recently said that after 50 plus years of birding, working on this book has made him aware of how complicated birds actually are.

As compelling as the information is, the pinnacle of this book is his rendering of over 200 species. It’s not a long shot to predict that those living in the future might look at him as we now look at Audubon. These are two men who understood that watching birds enriches us in every way possible. To bird is to use your body, challenge your brain and enhance your sense of aesthetic.

And as Emily Dickinson once said: "I hope you love birds too. It’s economical. It saves going to heaven."