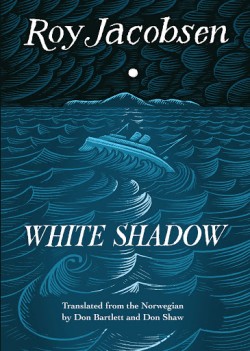 It's been a year.

"A year" is such an odd, unhelpful thing in which to place all that's happened. As a container, it's a stained, scuffed tuppy that smells of all the old meals that've been reheated in it. I'd bin it, if I could.

But people are suckers for anniversaries, and it's lately become popular to relate what you were doing this time last year, in what you may or may not have realized were the penultimate moments Before Everything Changed. For myself, it was about a year ago that, after a few days of being unable to concentrate on anything, I picked up the last book I grabbed from the bookstore before we shuttered. That was Roy Jacobsen's The Unseen. The patient concision of life on the Norwegian island of Barrøy, as described by the Man Booker-nominated Jacobsen, was perfectly mollifying for that moment in time. It made for an island within an island. The book is one of the few things about 2020 upon which I look back fondly.

Set in the early twentieth century, pre-WWI, The Unseen, which concerns the daily and seasonal machinations of sustaining three generations of Barrøys on their remote island, has the feeling of Before Everything Changed. The world at large is working itself into such a lather of both advancement and destruction that the island clearly can't maintain its remoteness for much longer. The sequel, White Shadow, again translated from the Norwegian by Don Barlett and Don Shaw and published by Biblioasis, picks up a world-war-and-a-half later, with the one remaining caretaker of the island, Igrid Barrøy. Ingrid is off island, mass processing fish to support her as the island itself is no longer support enough. The work season finished, she favoyrs one struggle over another and leaves her poorly paying factory job to return home.

War has reached Norway. The Germans are occupying. Barrøy may seem to be without earshot of war's repercussions, but the surrounding water which isolates it is also what brings casualties to its shore. At first, it's shreds of clothes that wash up. Then, in the snow, Ingrid spots more footprints than she herself would have made. She discovers a handful of shipwrecked dead, which she must defend from ravenous gulls, and one badly injured survivor. At a loss herself, the life of another person offers Ingrid something to live for.

There've been lots of jokes about how much time has actually passed in this one year marked by COVID-19, how much life has been lived within that arbitrary boundary, how we've experienced differently the accrual of days. To pick up White Shadow a year after The Unseen, to see that twenty-some years have passed for Ingrid in that year, seems fitting. Time doesn't mean much when you're in it. Usually it's only in looking back that all that time takes on import.

Time behaves differently between the two books, too, as the season-marked passage in the first has been turned chaotic in the second. When Ingrid first returns to the island, she frees her old family clock from hock, but has no one handy to get it working and wound again. Cut off from island time, from ancestral time, White Shadow is full of stutters and leaps and profound gaps in time. While the fight in the first book was to maintain the rhythm of life on the island, the drive in the second is to re-establish that flow, to return to an existence measured by the ebb and flow of life itself.

White Shadow may be somewhat less mollifying than its predecessor, but I don't need this year what I needed last. It's fitting that the book, in this time of both stuckness and movement, is about return following disruption, about re-establishing a more organic relationship to time and your own life within it. There's no telling the contents of this next year, or how much of it there will be, but at the very least, the end of this next year will see the release of the third and final installment in Jacobsen's series.