REVIEW: ON TIME AND WATER 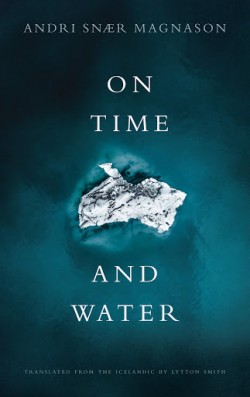 On Time and Water

"The aim is not to stoke fear," writes Andri Snær Magnason after surveying the devastation that's likely to result from the incremental warming of the earth's temperature. "But the paradox is that the problems won't get solved unless we first agree they are problems. We need to be burning with fear yet simultaneously believe the situation can be fixed."

Even in considering how to talk about Magnason's new book, translated from the Icelandic by Lytton Smith and published in Canada by Biblioasis, I'm aware that a razor's edge needs to be walked. I want people to read this book. It's a beautiful book that manages at once to evoke both the magnificence of the natural world and the profound ways we're alive in it, while also sternly detailing the ways we've put that world and ourselves at maybe irrevocable hazard. It's imperative that we discuss these matters, but we still haven't come up with a rhetoric that walks that fine fault line between callus indifference and traumatized disassociation. In On Time and Water, Magnason manages, above all else, an approachable, sometimes inspiring tone.

Language must change along with the changing world, but as language forms our reality, there can be a serious disconnect between how we live in the world and how we make sense of it. To better understand both our struggle to understand and wish to ignore our climate calamity, Magnason looks to Jørgen Jørgensen, the man who, in 1809, freed Iceland from Danish rule. While Denmark was embroiled in a war with England, Jørgensen wrested control over Iceland and gave power to the people. He lifted travel and trade restrictions and cut taxes. The King of the Dog Days, as he would be known, imported into Iceland revolutionary philosophies from Europe. But a new paradigm is of little use if it can't be made sense of, if there's not a language for it. "The apathy of the era's Icelanders disappointed Jørgen. He offered people freedom, but no one understood what he meant and so no one wanted to accept it."

"In elementary school," reflects Magnason, "my generation learned that Icelanders had endured six hundred years of oppression under Danish rule, and that during that whole time the nation longed for freedom and independence. But that wasn't at all the case. It wasn't until the mid-nineteenth century that romantic poets came up with the idea that the nation had always wanted independence. Most people had been impervious to the zeitgeist, quite content to live day to day. People live inside their own realities, locked in the prevailing language and power systems of their contemporary moment. Most people only think in terms of the paths and concepts offered within a given era. It took Icelanders more than a hundred years of poems, speeches, forums, declarations, translations, and conversations in Copenhagen taverns to fully understand the terms set out in Jørgen's declaration."

Unfortunately, we haven't got a hundred years. The current consensus is that we've got thirty years to cease all CO2 emissions. It's a time scale that doesn't offer much room rhetorical messaging or massaging. We need to act yesterday. Time--like "freedom," and like "ocean acidification"--is another elusive concept to grapple with. Over a century, we have had billions of years worth of influence on the world. Fifty percent of the CO2 in the air has been produced in the previous thirty years. "The Earth has abandoned geological speed," he writes. "It is changing at human speed."

To help with abstraction, Magnason uses human life as a unit of measurement. Early in the book, Magnason asks his daughter about her ninety-four-year-old great-grandma, born in 1924. He gets her to calculate what year it will be when she reaches ninety-four. Then, if in the year 2021 she also has a ten-year-old great-granddaughter, what year will it be when that great-grandaughter reaches ninety-four? 2186. "Yes, can you imagine that? You, born in 2008, might know a girl who will still be alive in the year 2186... Two hundred and sixty-two years. That's the length of time you connect across. You'll know the people who span this time. Your time is the time of the people you know and love, the time that molds you. And your time is also the time of the people you will know and love. The time that you will shape."

There is a lot to wrap one's head around in On Time and Water, a lot of harsh data and anecdotes. The contradiction is that we are the progenitors and the benefactors of our calamitous reality. We struggle to comprehend and make peace with something of our own making. We are living in a time when "technology and humanity's power [have] advanced far beyond our knowledge of nature." We became expert at creating causes before understanding their effects.

On Time and Water is an eloquent, approachable step towards comprehension, is a noble and pretty successful attempt to marinate 300ish pages with a hundred years of poetry. And, in some ways, the book is made more hopeful by the disaster of this past year.

"We have been stopped," Magnason begins his COVID-19 Postscript, written in May of last year. "I never imagined it could happen." The damning and damaging habits that we so desperately need to transition away from are, in terms of great-grandmas, only one great-grandma old. The pandemic has shown that these forces that most believed to be sacrosanct are, in fact, malleable and maybe reversible. If handled properly, we really can make the changes necessary to take a step back from the brink. If you find yourself burning with fear at the end of On Time and Water, you'll also be left with reason to believe the situation can be fixed.